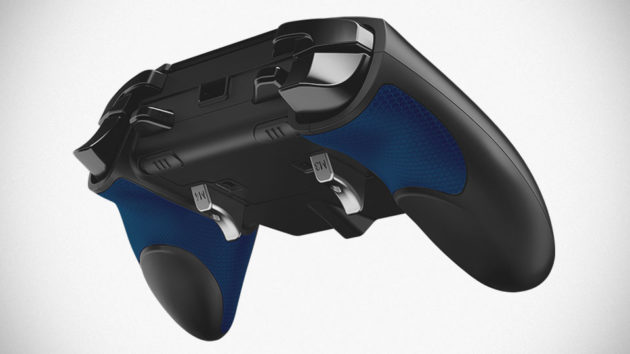 Of course, you don’t need to be a eSports gamer to enjoy what the Razer Raiju has to offer which includes features like a pair of additional bumpers and two additional detachable triggers, built-in front-facing control panel, trigger-stop switches and hair trigger mode for ultra-fast trigger responses, two modifiable custom profiles which you have the liberty to switch between instantly, 3.5 mm headphone jack along with dedicated volume and mic mute controls, detachable analog stick rubber caps, and finally, a removable braided 3m-long USB cable. And so, no, it is not a wireless unit like the stock controller, but I guess that’s the way eSports gamers dig.

As far as design goes, the Razer Raiju looks like what a controller should be. I am sure there are ergonomic considerations that went into the design too, though that wasn’t specifically laid out. Speaking of aesthetic, Razer Raiju does look a little Xbox-ish, but it could be just my eyes. No, wait. Seriously, it does look like an Xbox controller which is kind of ironic since Xbox is most certainly Playstation’s major competitor. Anywho, Razer Raiju is expected to be launched in time for this Holiday season, but so far, pricing detail has not been offered. If you are keen, you can signup to be notified on its availability HERE.