ever since the invention of camera, we have been blessed with the tool to capture our memories, but those memories are anything but complete. there are just things that are being left behind, literally. until now, the only other better way to capture a particular moment in its entirety is through videoing, but still, that doesn’t give you the complete picture at a glance. that’s where the Ricoh Theta 360-Degree Digital Camera comes in. as the product name implies, this unassuming camera lets capture the entire surrounding, forming a spherical photo where you could finally be bestowed with spider-like vision and see every thing in its totality. the only catch is, it only works when paired with an iOS device and using a companion app and whoever you are sharing with will need to have the same app (or through a special website) in order to view the spherical image without distortion.

connection between your device and the Theta digital camera is through WiFi and as for storage, it can either be wirelessly transmitted to your iOS device for instant sharing on social network websites or stored internally in the camera itself. when connected to an iOS device such as iPhone or iPad, the connected device can also be used to remotely trigger the shutter release. the Ricoh Theta 360-Degree Digital Camera is no doubt an interesting product, but being novel doesn’t always equate to the need to have. we see little applications as far as regular consumers are concerned, however, if you have $399 to spare and could not bear leaving behind any scenery, this camera is the camera for you. click past the jump for a couple of videos to learn more and see the Ricoh Theta 360-Degree Digital Camera in action. 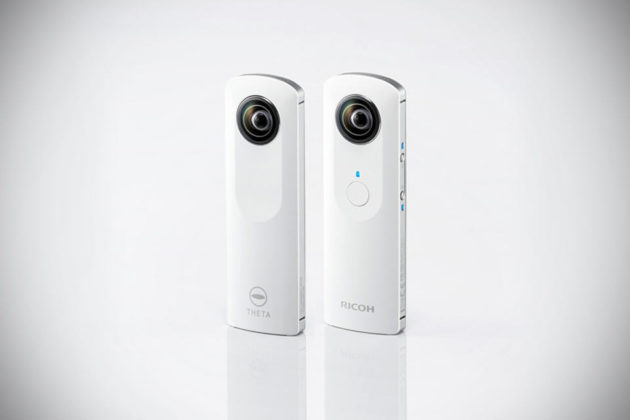