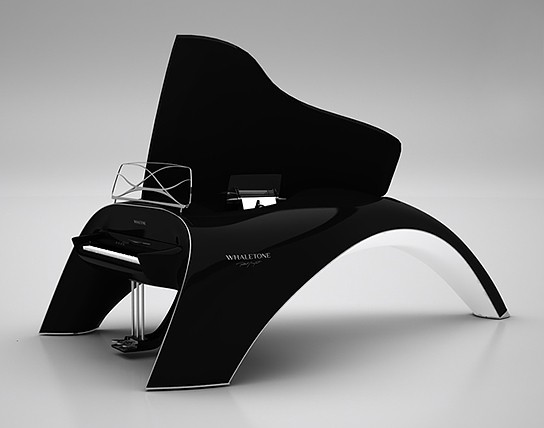 i agree with Hipstomp statement that “redesigning a grand piano is pretty ballsy.” we often heard people says, don’t mend it if it ain’t broken but apparently, Polish designer Robert Majkut doesn’t heed such an advice and the result is a totally radical grand piano and when i said ‘totally radical’ i really mean totally. it is indeed a huge challenge to change an overall form factor that has been deeply rooted in our mind. that said, Robert’s undertaking is akin to conquering the highest peak in the world but in design’s context.
[ad#Google Adsense-text-468×60]

i also believe Robert’s Whaletone Piano has pulled it off. just look at the organic yet majestic structure of his work of art and it is hard for one to dismiss the fact that Robert might have just got it. it all started out when he pondered over how little the grand piano has changed over the many years and he decided to take on the challenge in redesigning it. taking inspiration from the majestic beauty of the marine mammals, he finally came up with this awesomely gorgeous form which i simply can’t take my eyes of it – even when i am composing this article. oh, did i mention that the Whaletone is an advanced digital stage piano?