for Android users who are heavy on media consumption, storage is always a premium. the norm for today’s handset is 32GB onboard storage tops which means the only way you are going to get more storage would be through cloud or via microSD card. honestly, we would trust a card over cloud anytime, mainly because of the sometimes shady networks. anyway, if you are on the same page as us, there is a good news from the kingdom of card storage: SanDisk has announced the world’s highest capacity microSDXC memory card with a staggering 128GB of digital storage space. that’s double of what the current horde of microSD cards has to offer.

if you haven’t use a microSDXC card before, you probably will not be impressed other than going ‘wow, 128GB of storage. ok. sounds good’ but if you do, then you will know this is quite a technological feat to be packing such a huge capacity into a card that’s barely the size of a fingernail, allowing you to store thousands of digital contents which would be otherwise not possible on the handset itself. but this development has more profound implication: as the technology spreads, it would mean future handsets could have more storage at a lower cost, while not eating up valuable internal hardware space, which in turns mean that more features could be implemented on the phone or perhaps, allowing space for larger battery.

we are definitely looking forward for that to happen. but until then, we have to look to this tiny card to solve our digital storage crunch on our handsets, well, that’s provided that our handset even supports it. the SanDisk Ultra 128GB microSDXC UHS-I Memory Card has an MSRP of $199.99, but we found it listed on Amazon for just $119.99 a pop (including the adapter), but shipping is expected only in 2-3 weeks time. 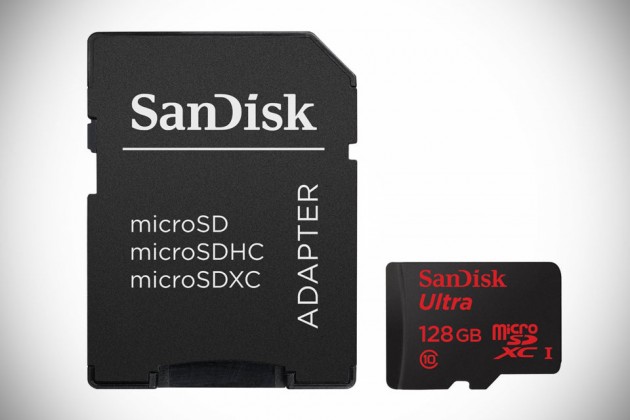