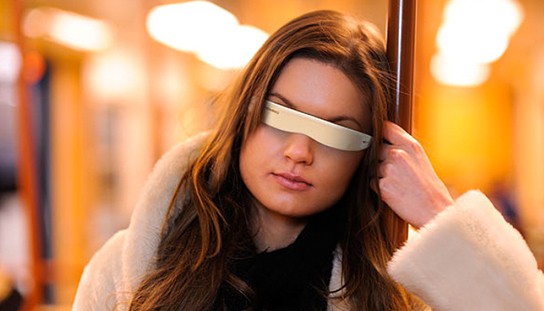 this sleek, curvy form eyewear looks like something out of a sci-fi movie. dubbed the MADISON Video Eyewear, this pair of video eyewear lets user immersed in a full-viewing experience akin to watching from a 30-inch TV at a 2-meter distant. the video eyewear comprises of two part, a portable media player which is connected via a cable to the video eyewear.

the portable media player has D-pad-like control for menu navigations which is projected on the onscreen display. the player has a standard 2 GB internal storage, which is expandable up to 32 GB via the SD card slot. the Novero Madison Video Eyewear features two OLED displays with 320 x 240 pixels resolution and weights 63 grams without the player and cable. it comes packaged with a frame for corrective lenses and composite video cable for input from external players such as your Blu-ray player.

the accompanying software (for both PC & Mac) which employs simple drag and drop method, let users manage their videos. the software also automatically convert your videos, optimized for the video eyewear thus eliminating the hassle of converting videos manually. with the purchase of the optional adapter, the eyewear can also accept other portable media player such as the iPod, iPhone and other mobile phones.

the idea is, we spent too much time waiting and doing nothing while we are waiting for our train or commuting around, thus this video eyewear could provides us with some much needed entertainment if your local train station busker isn’t there to entertain you. the best part is, we can do it without those nosy people peeking on what you are watching. just remember to remove it when its time for you to walk, else you might just ended up in a pillar.

the Novero MADISON Video Eyewear is set to retail around €249 (about US$339) and will be available sometime in the second quarter of 2011.