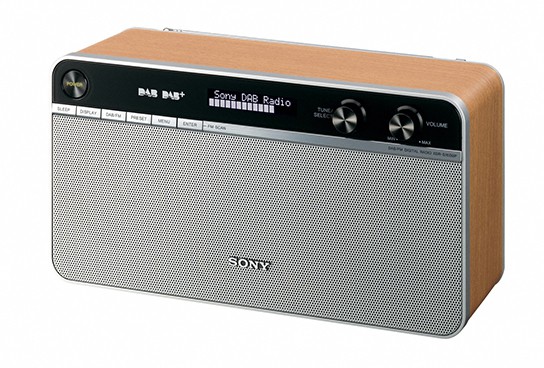 does anyone listen to radio anymore? i can’t remember when was the last time i tuned in for some good old fashion transmission. in anyway, if you are still tuning in to the stations, you would probably want to check out this latest offering from Sony Europe, the Sony XDR-S16DBP DAB Radio. at a glance, this unit has an unmistakeable retro-flair as emphasized by its silver speaker fascia and rounded natural wood cabinet.
[ad#Google Adsense-text-468×60]

the XDR-S16DBP DAB kept things simple with minimum controls, which gives it an elegant and clean look. this unit is also one of the first from Sony that offers compatibility with enhanced DAB+ digital broadcasting standard and features ten presets for DAB/DAB+ stations as well as ten presets for FM stations. sound output are handled by a pair of stereo speakers rated at a modest 0.8W each. a 16×2 character LCD display provides readout of DAB/DAB+ channel and program information.

other features include sleep timer and headphone jack. i suppose if you are a radio station connoisseur, you would understand that DAB unit only works in certain countries but however, if your country doesn’t have DAB, this unit is also able to receive conventional FM radio signals. unlike some other DAB unit in the market, this particular offering from Sony does not sport any docking or USB interface for external media player inputs. which is quite a downer, in my opinion. no word on it’s pricing and availability at this point, though.