its ashamed that these aren’t for sales, if not, this will be the perfect evening gowns for any Star Wars geek girl. designed by Rodarte, the Star Wars-Themed Gowns are part of the fashion house’s Autumn/Winter 2014 Collection showcased at the recent New York Fashion Week (NYFW). we can imagine no girls will look the part of Star Wars movies since these aren’t costumes – they are gowns more suited for some former events hosted by Galactic Emperor or the Jedi High Council and wouldn’t be fit for any Halloween parties – even if the ladies had Princess Leia’s trademark ‘cinnamon buns’.

each classy gown is just regular gown (no holster for light saber or laser shooting guns, though), adorned with iconic Star Wars characters and images like Luke Skywalker, Yoda, C-3PO, glowing moons of Tatooine, and Death Star (on an appropriately dark dress, if we might add). the word is, Rodarte designers Kate and Laura Mulleavy are both sci-fi nerds and also happens to be friends to Star Wars director George Lucas, and so it is suffice to say these folks didn’t step on any giant’s foot when they decided to incorporate the century’s most iconic sci-fi movies into those dresses. like we said, they are not for sale, but you probably will be seeing them around in exhibits and they will also be used in editorial shoots for fall. 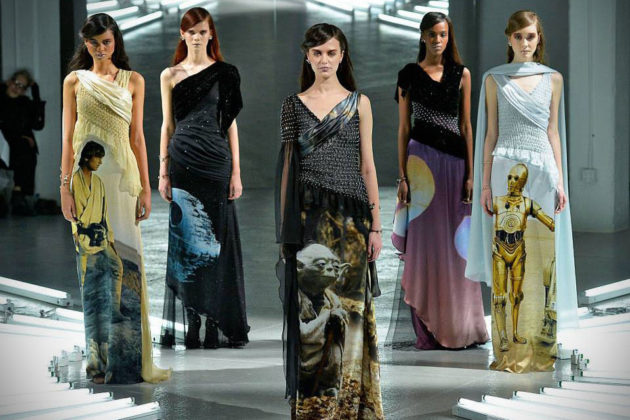