rockers have traditionally being associated with alcohol beverages aka boozes. don’t deny it. it is true and you know it. anyway, going along that line, what’s the best way to mark a legendary band like The Rolling Stones’ 50th Anniversary than the booze itself, which is precisely what Japan beverage maker, Suntory has done. it has released a limited edition of a new blended whisky, aptly dubbed as The Rolling Stones’ 50th Anniversary Whisky to mark this significant year of this half a century old rock band. this particular blend is the result of carefully selected malts distilled and casked in the band’s milestone years throughout the half century span, which include a malt from the year the band was formed that has been long-aged in Japanese oak casks.

the blend is bottled in a crystal bottle designed around the band’s icon: the lips and tongue logo and features a decorative plug in the likeness of a diamond with the lips and tongue logo surrounding it. other features include a beautiful dark wood and leather storage box, a pedestal with stamped nameplate and last but not least, the 50th Anniversary logo on the back of the bottle acts as a reminder that this ain’t your regular malt drink. The Rolling Stones’ 50th Anniversary Whisky is officially launched on the October 30, 2012 with only 150 bottles to go around and as for the pricing, it will set you back at a whopping 500,000 yen or about US$6,300 each, based on today’s going rate. another look below at some of the details (click on images for larger view). 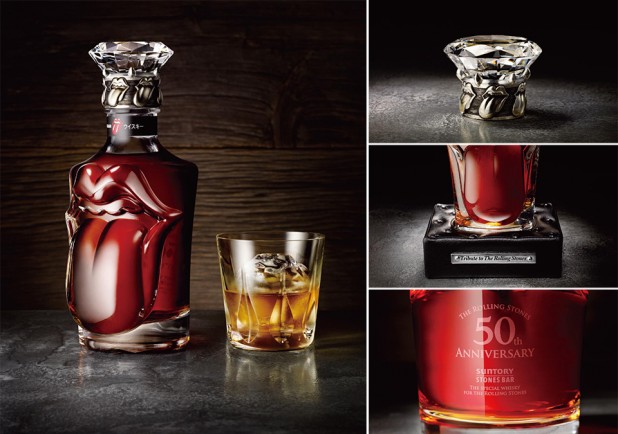