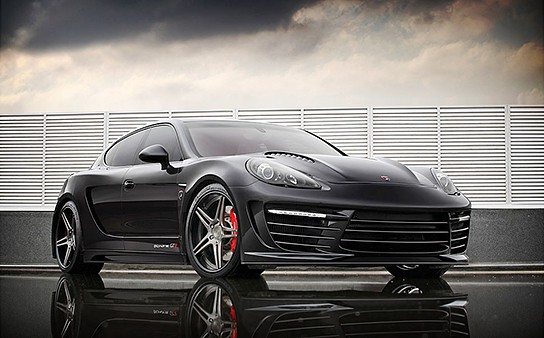 language proves to be no barrier when it comes to gorgeous souped up cars. case in point: this beautifully (and aggressively) custom Porsche Panamera Stingray GTR by Russian tuning house, TopCar. perhaps these ‘tweaks’ should give the Panamera the rave reviews that it was lacking. the Stingray GTR, as i would prefer to call it, received a host of aesthetic improvement that features “a nearly all-new” carbon fiber and kevlar body which includes new front and rear bumpers, air vents (obvious!), widened fenders, modified doors (all four of them!), bonnets, wings, rear diffuser, massive spoiler, and side skirting. check out more images this beautiful example after the break.
[ad#Google Adsense-text-468×60]

what’s look without grunt? hence, performance department wasn’t spared either, though i suspect no internals were meddled with. in fact there are two performance packages for this vehicle. for the first option, the 4.8-liter V8 engine is given a high-flow air filter, a new intake manifold and a sports exhaust system that enables it to push out over 600 hp (447 kW). no torque figure were given, though. the second option is said to involve more “sophisticated” modifications, resulting in a 700 hp (522 kW) output. so the price for such perfection (or aggression, as some would say)? whichever package you opt for it will be €45,000 (about US$64,282) and it will have a limited production run of just 25 units. so get your checkbook ready, cos’ 25 sounds like an easily snapped up number.