I still can’t believe they actually made a movie about emoji. I know right. How is it even possible? I mean, inanimate objects that we attached with text messages are being turned into living, talking heroes? I know, with over 5 billion emojis being sent everyday, there is no doubt that emoji super huge, but a movie, really? Anyways, speaking of the ridiculously number of emojis being sent on daily basis, one couldn’t help but to be curious about what are the most commonly used. Well, to be honest, we don’t have the numbers for the world, but we do have the stats for the U.S. Someone managed to find out which emoji is the most used for each of the 50 states.

As it turns out, love, poop, LoL emojis are the most used in some states. Yup. Poop. Apparently Mr. Hanky is the favorite in Arizona,Jersey, North Dakota, Wisconsin and Wyoming. What’s up that? And also, eggplant and peach? What messages were they sending? LoL! I am kind of surprised the bird isn’t one of the most popular emoji. Anywho, some fun facts before we present to you the The United States Emoji Map. Emoji, which are essentially pictograph, originated in Japan where it was used in mobile phones in the later part of the 90s. It soon grew beyond facial expressions to include everyday objects, fruits, animals, weather and more.

However, emoji’s popularity did not grow a lot until the arrival of smartphones when Apple, and subsequently Google’s Android, adopted it in their respective mobile operating systems, and later on, accepted as a standard on various social media platforms, including Facebook and Twitter. Whether you are a fan or not, emoji is one of those invention that is here to stay and so perhaps, I guess it does make sense to make a movie out of it (or was it ‘them’?). I don’t know. Skip ahead for the United State Emoji Map. Oh wait, you are see it above, didn’t you? Never mind. 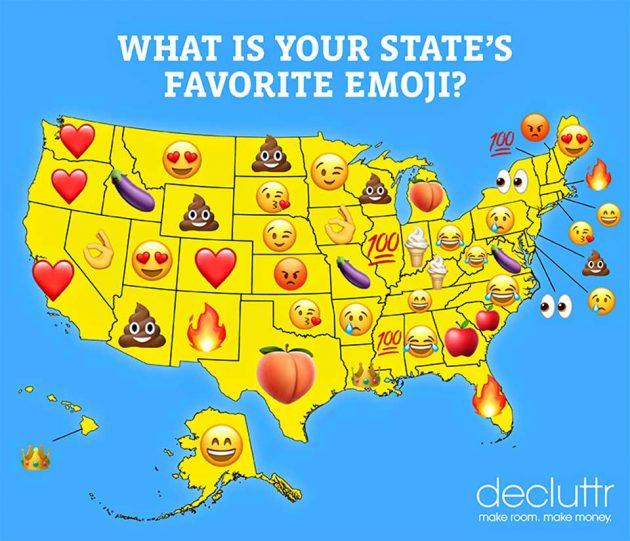