Clearly, 2015 is not quite the future as some of us might have anticipated and I doubt 2025 will be any different from today, but that’s probably just on the surface because there are countless researchers and scientists working behind the scenes in the name of a better future. One such invention born out of years of R&D is the University of Michigan’s Micro Mote, a super tiny autonomous computer that measures just a millimeter. In fact, the Michigan Micro Mote (M^3) you see today is the result of over a decade of development by the faculty and students at the University of Michigan’s computer science department. The aim is, of course, to lend intelligence to everyday objects such as toaster, washing machine, or even doorknob.

Dag Spicer, senior curator at the Computer History Museum in Mountain View, California, anticipates that all those everyday common objects “will someday have integrated circuits in them that can talk to each other over a network”, which sounds as scary, as it is exciting. The Micro Mote might be as small as a grain of rice, but it is loaded to the brim with features like low-resolution camera, temperature and pressure sensors, among other things. So what can a computer (more correctly, a sensor node, actually) do? Loads. It can, for example, be injected to a person, where it can be expected to perform ECGs and perhaps, picks up pressure and temperature readings too. Another example cited by CBS’s report include inserting it into oil wells to help detect pockets of oil that can still be tapped before moving on to another location. 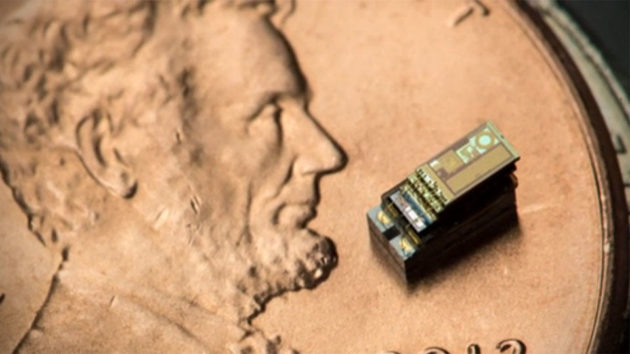 Furthermore, it may also be used to help you not to lose things again. As of now, such ‘tagging’ exists, but they can be quite an eyesore as they are still quite big, but with the M^3, you can stick to the objects of interest, such as keys, wallet, cordless phone, remote control and more, and achieve the same tracking result without you even noticing the sensor is there. Of course, such application, or whatever application it is going to be used for, would required an existing network cos’ this is, after all, a connected device. Perhaps, the two most interesting features we learned about this nano-size ‘computer’ are it is programmed and charged via light.

Obviously, device this tiny can’t afford any ports or even induction charger, much less be connected with traditional inputs like keyboard and mouse, and therefore, high-frequency strobing light is employed to send information to it. Information collected by the M^3, on the other hand, is pass back to the central computer through conventional radio frequencies. The last we read of this nano-size computer was a few years, and it is reportedly, ready for production now. Welcome to the future. You can learn more about the M^3 in the video below.