UK-based Wharfedale is best known for loudspeakers and have been favored by budget conscious music enthusiasts the world over, but today, they have another type of speaker in their arsenal: the Wharfedale Vista 100 Soundbar, which is the first one-piece speaker system the 82-year old company has to offer to space-deprived living room or for anyone who has problem with dealing with multiple speakers setup. sonic performance is undertaken by six neodymium drivers comprising of two 75 mm, two 70 mm and a pair of 50 mm items, bolstered by a built-in amplifier for 60W of audio power, while Wharfedale’s Sonic Emotion Absolute 3D technology promised to deliver crisp, dynamic and spatial sound regardless where you sit in the room.

also incorporated into the Vista 100 Soundbar is today’s obligatory Bluetooth connectivity for wireless audio streaming from paired Bluetooth-equipped sources, such as your smartphone and tablet. other details include selectable four EQ settings (Game, Movie, Music, and ‘off’), independent adjustment for bass and treble, plus four wired inputs, including two analog inputs (a set of RCA and 3.5mm audio jack) and two digital inputs in the form of coaxial and optical. the Wharfedale Vista 100 Soundbar will be available starting February 2014 with SRP of £149.95 in the U.K. no details on its availability outside of U.K., though. 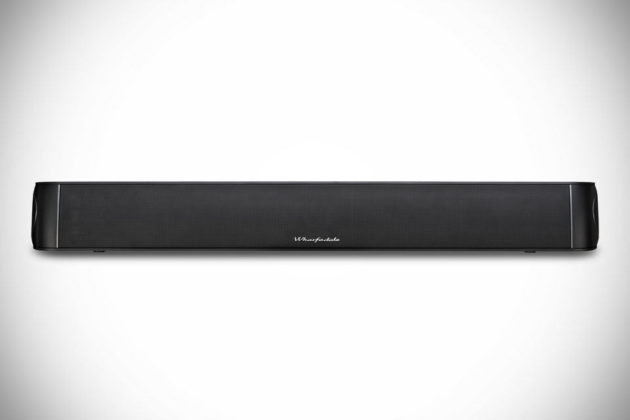