Microsoft, unfortunately, did not catch up in the game of smartphone. For those who are too young to remember, Microsoft was in the smartphone game way before iOS and Android. So, yes, the software did had a mobile Windows OS which was then known as Windows CE. But being one of the pioneers does not automatically grant Microsoft an edge. However, it does make one wonder “what if there was a smartphone running the once-popular Windows OS?” Well, imagine no more, my friends, because UI/UX designer Henrique Perticarati already imagined it on our behalf. 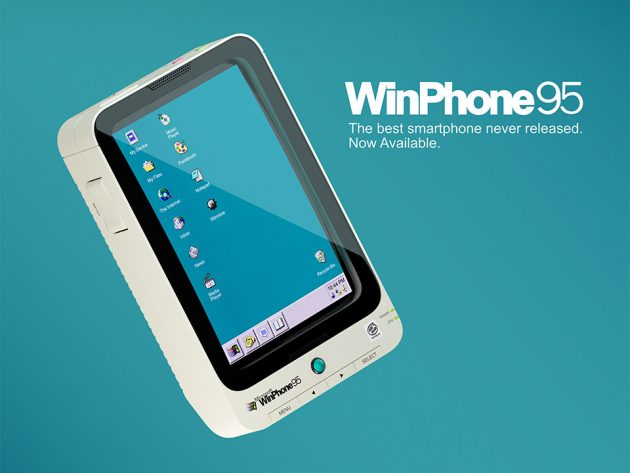 The fictional device, aptly called WinPhone 95, is exactly that: a chunky smartphone befitting its time and runs on Windows 95. Henrique even proposed that it comes in beige finish, a color that was commonly used on computer casing of its time, and it even has a trackball, a popular pointing device during that time, for navigation. And those are not all. This strangely alluring almost-retro piece of gadget imagined by this brilliant designer also features several recognizable details from the 90s and these includes a parallel port (yes even that!), VGA port and a DC charging port in place of USB port, an Ethernet port for connectivity, and a microphone jack alongside a headphone jack.

On Henrique’s imaginary device, it also gets an era-accurate camera, a 1.2MP Sony Mavica camera, for still photography and a display that reminisces of the old clunky cathode-ray tube monitor (yes, that’s right curved display!) but with a flat glass over it for the flat screen effect. Absolutely, brilliant. The device may be fictional, but the details’ era-accurate merits are not to be sneered. As I have said it is strangely alluring to see technologies of bygone era implemented into what was supposed to be modern gadget. It shares the same allure when modern day gadgets are given the steampunk treatment. Very surreal and intriguing at the same time. Keep on going to find the rest of the “marketing” materials to “promote” the WinPhone 95 smartphone.