For the longest time, an anonymous man in Michigan, U.S. has been using a meteorite as a doorstop. He knew it is a meteorite, but what he never realize was its actual worth. The story goes that the rock came with a farm in Edmore which this Michigan man bought in 1988. I guess the rock was special enough for the man to take notice and got a conversation started with the former farm owner. From the conversation, the man learned that it was in fact a meteorite that came crashing into Earth in the 1930s. Just in case you are wondering… no, the farmer ain’t Jonathan Kent and that was purely a meteorite. No space-age baby cradle came with it. 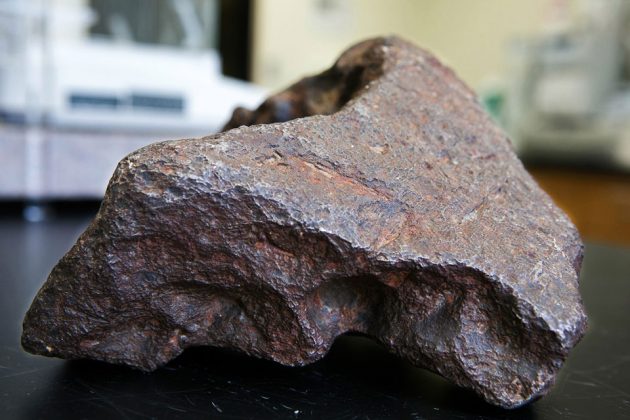 Anywho, the farmer said he dug out the “still-warm rock” from a crater with his dad and for some reasons, the farmer (or presumably his dad) decided to use to hold a door open at the farm. As explained above, it ended up with the Michigan taking possession of the space rock and he took it with him when he move and continue to use it as a doorstop. He also let his kids bring to school for show-and-tell, but really that’s about it… until now. The anonymous Michigan resident heard how some Michigan residents have been funding and selling meteorites, and that got him thinking how much exactly his space rock is worth. So, he did what any sane man would do.

NOW READ  Weird, Weird World Of Fashion Accessories Include A US$700 Clothespin Earring, A US$520 Ball-chain Choker, And More

He reached out to an expert to determine the authenticity of the rock. The person who examined the 22-pound rock was Mona Sibescu, a geology professor over at Central Michigan University, who noted that the rock actually contains 88.5 percent iron and 11.5 percent nickel, which means it is in effect an iron-nickel meteorite and a material that is considered rare on Earth. Well, if there are others, I’d say they are from outer space anyways. Anywho, at 22 pounds (or about 10 kilograms), Sibescu said the doorstop space rock is the sixth-largest recorded find in Michigan and apparently, it is worth as much as $100,000. Hmmm. And they say money don’t drop by the sky, eh?

Prof also sent a sample of the rock to Smithsonian Institution in Washington, D.C. who confirms the true identify of this rather unassuming rock. We heard the Smithsonian and a mineral museum in Maine may want to buy the meteorite for display.