Privacy is a huge concern in today’s world. In addition to be tracked (even if you specifically indicated that don’t want to be tracked), today’s folks are also being watched. It is probably OK if you are being watched in public, but what if you are also being watched in spaces where you expected to be private, such as bathrooms and temporary accommodations like AirBnB and even reputable hotels? If those places can’t guarantee your privacy, it is down to you to do something about it with this nifty device called SpyFinder PRO Hidden Camera Detector. 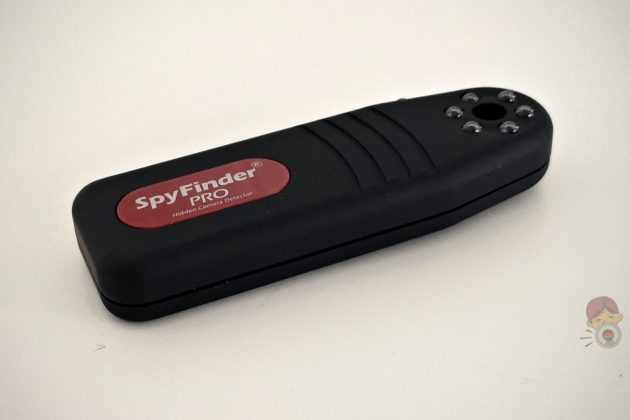 As the product name implies, this gadget is designed to snoop out any hidden cameras in areas where you are concerned with and let me tell you this: it does work as advertised and quite effectively. Recently, we managed to get our hands on an unit and had it put through the paces. Keeping reading to find our take on the SpyFinder PRO Hidden Camera Detector.

What are Hidden Cameras and why they exists?
Hidden cameras are, as its name suggests, cameras installed in a discreet manner so no one, except for the installer, knows of their presence, and they are quite obviously usually there with malicious intents which need no further explanations.

What are the potential places of these cameras?
These cameras are almost always incognito. It could be a plush toy, a pen, a coat hanger, or even a seemingly harmless adapter, such as the one pictured above. The technology has advanced so much that camera lens and sensor is able to fit even the smallest, everyday object.

The principle is simple: when the lights from these super bright LEDs land on camera lenses, they will reflect off the lens and thus, giving away their presence. Red optics on the viewfinder enhances the view so you can easily spot the reflecting red light. Simple but very effective, as I have experienced it first hand.

The packaging and the hardware
SpyFinder PRO Hidden Camera Detector comes in a no-frill box, sealed. In it, you will find the palm-size, super lightweight SpyFinder PRO Hidden Camera Detector hardware, along with a pair of AAA batteries, a handy hex/screwdriver that doubles as a keychain, a couple of spare screws, and of course, a manual written in clear, concise English. The screwdriver is for unlocking the battery compartment, while the spare screws are thoughtful addition for in case you managed to loose the screw. All the items are neatly inserted in their respective foam cutouts.

On one end of the device, on the front, are six powerful red LEDs and a viewfinder with red-tinted optics nested in middle. Around the back is the battery compartment and light intensity controller that has three level of brightness to suit different room sizes and ambient light conditions. On the top side, you find a lone power on/off button that is large and obvious enough to activate even if you are not looking at it (the button).

Build-wise. I was pleasantly surprise. The device feels solidly built with no loose parts or whatsoever. I have this distaste for poorly put together gadgets and so, I had to give it a gently shake to see if anything is loose. Nothing – save for the very faint sound coming from the two buttons which is inevitable. Hey, it is not a thousand dollar iPhone X after all, is it? Anywho, the finish is of matte black and it feels just as good on the hands.

Setup, or the lack thereof
It has next to zero setup to do. All you need is to install the supplied batteries and you are pretty much all set. We do recommend reading the manual, even though you can actually start using without doing so. Lets just say that reading the manual, which takes no more than a few minutes, give you an insight to the ‘science’ behind this handy privacy gadget.

Well, it works exactly as advertised
Before we proceed, you ought know that the LEDs are really, really super bright and it is a good idea not to look directly at it. You have been warned. Now that we have gotten the gentle reminder out of the way… we shall proceed with my quality time with the SpyFinder PRO Hidden Camera Detector. To use the device, simply put the viewfinder to your eye (with the LEDs facing away from you, obviously). When ready, just hit the power button above and start scanning the area.

The recommended effective range is +/- 3-33 feet (1-10 meters), but TBH, we are not quite bothered by the range because, this device should be use instinctively. I mean, you don’t stand in the middle and start scanning, and believe you have cover it all. You probably won’t. You can be in expansive President Suite in some swanky hotels, but you do need to be smart like standing at a reasonable distance at the suspect area and start looking scanning, and move accordingly.

As you can see below, I managed to capture it in stills. The black object plugged to the outlet appears to be an ordinary adapter to the naked eyes, but when seen through the SpyFinder PRO Hidden Camera Detector, you can clearly see a tiny red dot reflecting of it, indicating that it is a hidden camera. In honestly, it is not 100 percent foolproof. But not in the bad way, really.

You see, in some unique instances, the device may return ‘false positive’, or false alarm, caused by light reflected from glossy objects. This is particularly prominent on curved reflective surfaces, such as door knobs and in my example pictured, the cockpit of the a LEGO TIE Fighter (pictured below). Like I have said, it is not exactly a bad thing because, at least it won’t miss any lens lurking around you.

If you want to be sure, all you have to do is view the suspect area at a different angle or vantage point. If the earlier suspected red reflection changes position, it probably is just a false positive, where else if it is an actual camera lens, the position will remain unchanged. In any case, if there is a suspect, then it is probably good to check it out physically. There’s really no harm in being overly cautious.

Conclusion
After spending a couple of hours exploring the SpyFinder PRO Hidden Camera Detector, I can say it worked as advertised. It did offer a few false positive here and there, but still I will say it is a gadget on my to-bring list when traveling from this day on. It is really handy and it slips into the pocket or small purse easily. For ladies who are wary that some bathroom may have hidden camera, SpyFinder PRO Hidden Camera Detector offers a quick and easy solution, so you’d have a peace of mind every time you need to take a leak. It will be the money and time well spent, as opposed getting famous for the wrong reasons. If you know what I mean.

SpyFinder PRO Hidden Camera Detector will retail for $248 when it becomes in December 2018, but from now till November 25, 2018 2:53 AM (Australian Western Standard Time), you can secure a unit for 20 percent less, at $198, if back the product on Kickstarter. If all goes as planned, i.e. the campaign gets funded, you will be able find SpyFinder PRO Hidden Camera Detector at your doorstep sometime in December 2018.

UPDATE: SpyFinder was successfully funded on Kickstarter. If you missed it, you can still find it on Spy Associates website going for $248 a pop.