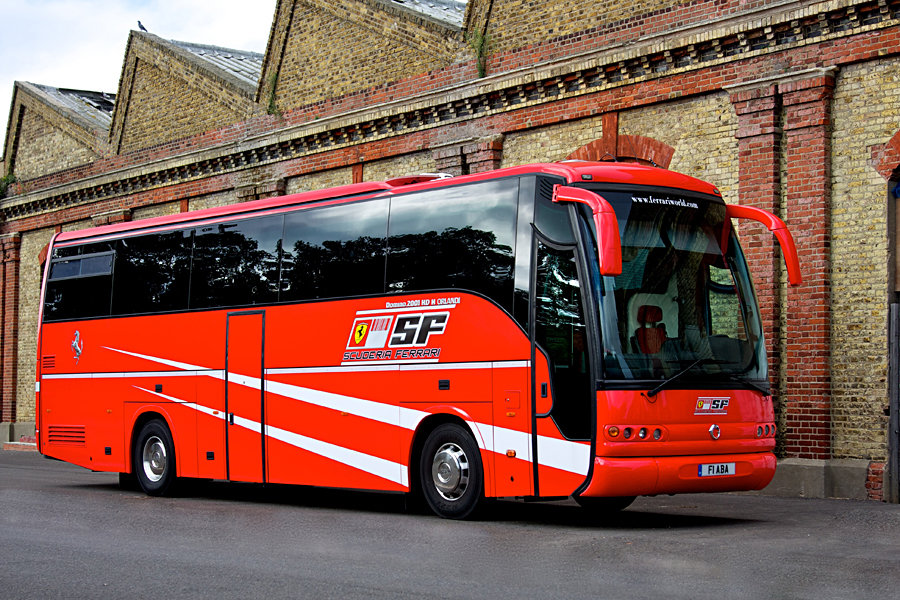 the life of a Formula One race car driver is akin to that of a pop superstar as he would be blessed with similar perks like fast cars (both on and off the track), ladies, and a glamorous superstar motor coach. unfortunately, there’s no talent show like American Idol for Formula One race car drivers to let you have a shot at such prestigious stardom. the only way to live those dream is… well, continue your dream or you could plonk down good money for a real Formula One car for your weekend track-day and a real Formula One team motor coach to add to the realism. you probably have heard about the former (and probably already had one in your garage), so it is time to snag yourself a 2001 Iveco Domino HDH Orlandi Scuderia Ferrari F1 Driver’s Coach as used by team Ferrari to travel from Maranello to all major European F1 Grand Prix races during the 2001 to 2005 seasons, and yes, this was the vehicle that Rubens Barrichello and Michael Schumacher had once used.
[ad#Google Adsense-text-468×60]

understandably, this motor coach is not your regular coach, it was specially designed to meet the work and rest demands of the Formula One drivers, which include an area for strategic meetings and interviews, and separate access apartments (amazingly, there are two of them) that features spacious living room, LCD TV, computer table, independent lighting, satellite telephone and Internet connectivity, and a host of other fittings for anyone residing in it to call it home. there’s even a physiotherapy massage bed and table for post-race treatments. other features include the obvious Ferrari Red paint job, red leather upholstery, improved electrical and mechanical components, complete bath with ceramic lavatory, independent heating and air-conditioning system, and onboard 220-volt diesel generator that provide the juice necessary to power all onboard amenities. well, actually, that’s not all.

the current owner has given this beautiful home on the wheels a slew of upgrades that include a GBP motor-home conversion, entertainment and communication upgrades like TVs, Satellite/Internet connectivity, a Bose home theatre system, and a Hastens Luxuria bed that is said to worth £5,520. a good start for your imaginary Formula One driving career, less the annoyance of paparazzi and mandatory card workouts. the 2001 Iveco Domino HDH Orlandi Scuderia Ferrari F1 Driver’s Coach is expected to fetch between £200K to £300k when it goes under the hammer at the upcoming London sale, organized by RM Auctions, on the October 26 at the Battersea Evolution, Battersea Park, London. head past the jump for more images of this fiery red motor coach.