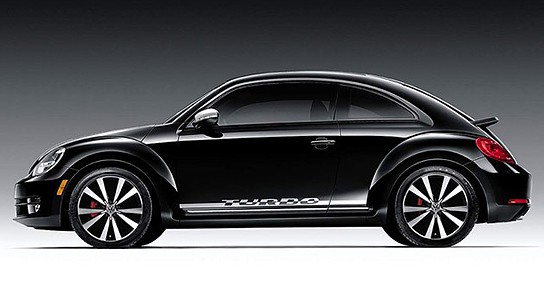 can’t wait to get your hands on the new 2012 Volkswagen Beetle? you can either wait till this October or put your name down for one of the first 2012 Beetle that will hitting the America’s roads. when i said “America’s roads”, it is pretty obvious this should be a welcome news for Beetle-fans residing in the US. Volkswagen of America announced earlier this week the launch of the Vehicle Pre-order (VPO) program which allows you to be the first in line to reserve one of the limited quantity Volkswagen cars, and kicking off this program is the 2012 Volkswagen Beetle Black Turbo Launch Edition.
[ad#Google Adsense-text-468×60]

the 2012 Volkswagen Beetle Black Turbo Launch Edition is available for pre-order now for a $495 reservation fee that will goes toward the final purchase price of $24,950. check out a few more images after the break.