there are cars and there are cars that are truly worthy of being called iconic, and among them is a non-giant known as Shelby Cobra, which during the 60s, took part in the World Manufacturers Championship series that saw it going head-to-head with ‘giants’ such as Aston Martin, Jaguar and Corvette. marking the 50th year since the birth of the 289 Ford small block-powered legend, Shelby American is giving motoring enthusiasts the 50th Anniversary Shelby FIA Cobra. each of the 50 units offered is given a “Viking Blue” paint job, complete with FIA stripes and roundels and has a black FIA interior, special billet anniversary badges and original style racing wheels with pin-drive hub.

do not mistaken this as ‘just another limited edition ride’ that is designed with the sole intention of luring your greens out of your bank vault; this ride is for serious motoring enthusiasts with each car being available as built to order unit and delivered as a rolling chassis, sans the drivetrain, with a Shelby American issued MSO. the 50th Anniversary Shelby FIA Cobra, or otherwise known as the 50th Anniversary CSX7000 FIA Continuation Cobra, is the modern iteration that retains everything from the authentic style suspension to the trademark body lines, built to modern standards.

highlights include a modern disc brake system, a complete exhaust for a small block Ford V8, a special fitted car cover, optional detachable steering wheel, a stronger frame and a choice of aluminum or fiberglass body. the 50th Anniversary Shelby FIA Cobra is available through Shelby American Cobra dealers starting at $94,995 for a fiberglass bodied model and $159,995 for an aluminum bodied version. the starting price is, naturally, without the drivetrain and each vehicle will be recorded in Shelby American’s World Registry. another look after the break. 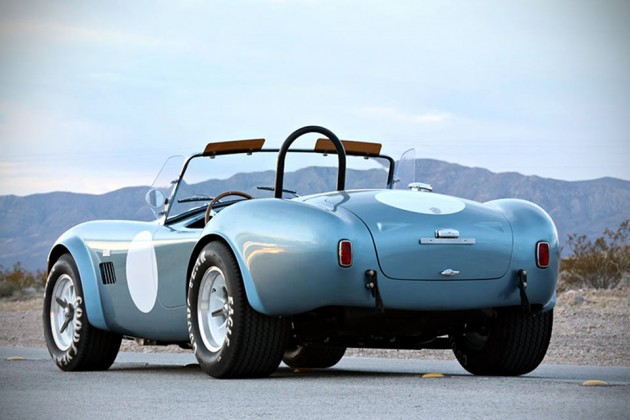