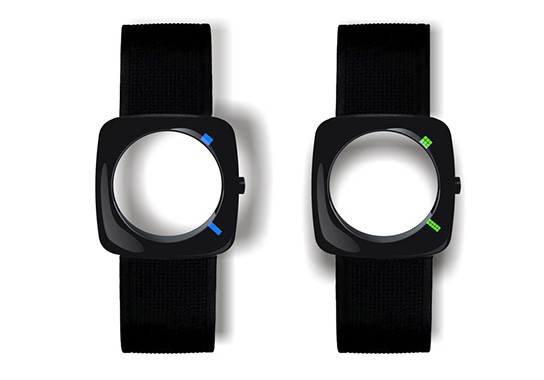 we have seen lots of unconventional way of telling time from a time piece, such as the TokyoFlash wristwatches. but one without a watch face? well, this is exactly what the Eye of The Storm is – a watch that does not have a face. designed by German-based product designer, Yiran Qian, the watch appears to be like a bracelet until its wearer presses a button at the side of the watch and two indicators appear along the inner edge (where the watch face supposed to be) and tells you the time.
[ad#Google Adsense-text-468×60]

the two indicator appears to be the ‘tips’ of the hour and minute hands just like any other analog watches. apparently, some people are sensitive to metal which is usually what the back of the case is made of. thus this will saves those from this allergy agony and on top of that, this design will use less materials (if haven’t notice, its because of the big hole in the middle), therefore lowering its production cost. at least that’s the whole concept behind this design. kind of weird to be looking down on your own skin instead of time and i though the indicators should remain ‘on’ permanently instead of having the hassle of ‘pressing to tell time’. ok, i am just plain lazy. i’d rather be using one hand to tell time.

then again, this is whole lot easier to tell the time than the TokyoFlash watches.