Drone technology has come a long way. Its birth is not with controversy, but then it goes beyond military to empower everyday people with ability to do aerial imaging, land surveying, inspect building, and even burning trash. Now, a San Francisco robotics company, Otherlab, is taking drone technology to another level of goodness. With the funding from DARPA, the company has developed a disposal drone that’s designed to deliver supplies to disaster zones and for humanitarian aids. The origami-style cardboard drone has minimal electronics; it has just a GPS module which works to steer a pair of motors on the wing-style drone to its destination.

The aircraft is designed for one-time use and it has no drive motor of its own. Deployment of Aerial Platform Supporting Autonomous Resupply Actions (APSARA) Drones, as it is called, is by airdrop over the the targeted area. From there, the GPS and onboard steering motors take over the task of maneuvering to the target to within a 50 feet (15 m) accuracy. Part of DARPA’s requirements include the ability to carry a small payload, land as preset, and once it has done its duty, it has to decompose. Otherlab decides to go with cardboard, the choice material among hobbyists, for starter. 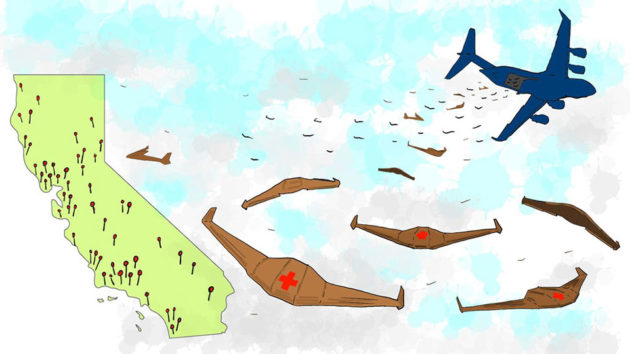 It is relatively lightweight and highly compostable material, albeit requiring a few months to completely disappear. However, the company has planned to refine the drone to use a mushroom-based material called mycelium (like the one used on the biodegradable drone we saw a few years ago) which is known to decompose in days. Aerial Platform Supporting Autonomous Resupply Actions is not a drone destined to work alone; it is designed to work in masses to deliver supplies to critical zones and hence the need for it to be decomposable because it is not going to be pretty sight to have drone carcasses litter all over the target zone.

But why not make the drone controllable so it could be flown back? Well, simple: cost. The aim is also to produce a low cost and quick solution, and having a full-fledge unmanned or autonomous vehicle would means high cost of production and that’s not to mention cost of operation. Obviously, those are not exactly ideals. However, ASPARA is only solves part of the decomposable equation as the electronics, however, minimal, are not decomposable. But we read that DARPA has another program to address that and so, if that succeeds and the two solutions come together, it would result in a ‘perfect’ solution to what DARPA is seeking. Don’t you just love science and technology? I mean, at least you know the development will also do good?

via Wired via treehugger.