Tech staff: “Sir, I think may have our suspect on security cam.”
Detective: “Good! Pull it up.”
Detective: “Can’t see his face. Zoom it up, son.”
Tech staff: “Alright, zooming in.”
Detective: “There! He is the guy we are after!”
If the above scenario sounds familiar, it is because similar scenario has been on countless TV shows and Hollywood movies, and both you and I know it ain’t true. This scenario only exists in a perfect world, which for the record, ours isn’t it. All those zoom-in-and-still-clear-as-day resolution images depicted in TV shows and movies are nothing more than a tech fantasy. 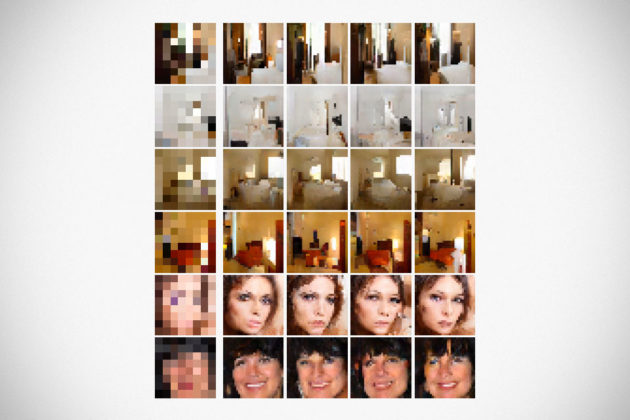 However, internet search giant Google may be inching to this modern day fantasy. Developed by Google Brain team and dubbed Pixel Recursive Super Resolution, it uses AI to fill out the missing details on a very low-resolution image. In simple, layman terms, the computer essentially ‘imagine’ (well, kind of) the missing pixels in relation to the overall image, filling them out as opposed to brunt sharping which doers nothing if an image is as low as 8px by 8px, such as the examples used by Google Brain team. As you can see from the image above, the enhanced images are definitely not year book worthy, but they are detailed enough to be recognizable in most instances.

It may be viewed as a small progression, but it’s a start that may one day lead to what we often see on TV shows and movies. So what uses such technology has? I supposed, the first that comes to mind would be police work, like identifying alleged suspect face or vehicle license plate number caught on security cam. Commercially, it could be useful for everyday image resizing jobs too. But all that will have to wait till the technology can be bettered, but rest assured the world is getting there. Of course, the entire develop is more complex than what our 300 words can express. So, if you are keen, you can read up the entirety of the development HERE. For the rest of us who we don’t bother, all you have to know that the technology of this fantasy tech is on the horizon.