Airbus A380 may have changed how we fly, or rather how we enjoy our time in the air, but lets face it, being trapped 30,000 feet in the sky with limited space and only a tiny screen to keep us entertained is not fun. However, if Windspeed Technologies has its way with its SkyDeck proposition, you may have one more thing to appreciate about flying. Windspeed Technologies has a bold ambition put a hole on the roof of an aircraft and turn it into a 360-degree viewing bubble where passengers can sit up there and enjoy the expansive clear blue sky. 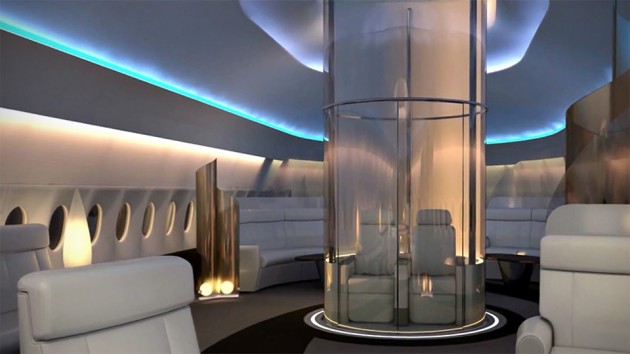 It proposes two ways to get up there: first, by the way of an in-aircraft elevator and two, a set of raise up stairs. Though we suspect a typical aircraft ceiling won’t be as thick as depicted in the animations. For now, we ignore the construction practicality and assume the outfit has thought through everything. Anyways, whichever way of access, it will eventually lead to the top of the aircraft where excited passengers seat in specially designed thrones that can be rotated at the passengers’ command. There’s even a tablet like display that flips to show the journey’s progress. Well, not that anyone can relate the progress to the featureless sky anyways. 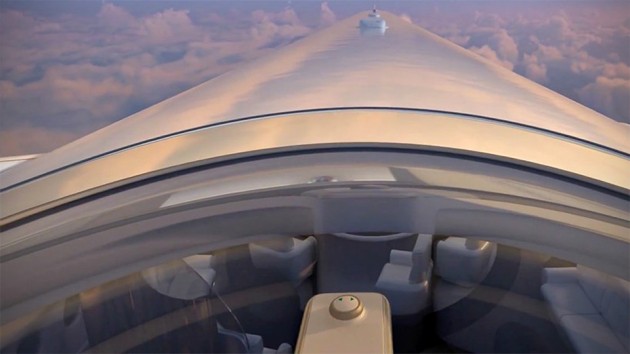 The bubble canopy will be treated with anti-condensation (which will happen a lot at that freezing cold altitude), anti-fog and UV protection, and will be strong enough to combat the elements and stand up agains birds’ strikes. This 360-degree viewing port will be shaped like a tear drop which, reportedly, will not mess with the aircraft’s aerodynamics. But hey, we are no aero specialists here, but something tells us that it will make the plane less aerodynamically efficient as oppose to a smooth top and that in turn will bump up the fuel consumption somehow.

Don’t get us wrong. We love the concept, but at the same time, we suspect it could be a really expensive novelty and if airline chose to charge passengers for the use of this view port as suggested, then we could only imagine two things: it will be downright expensive and the novelty will wear out as quickly as it has appear. Intro videos can be found below.