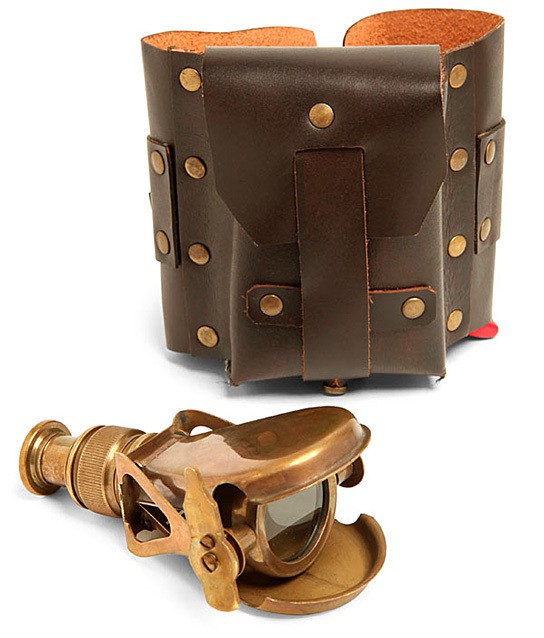 if love Sky Captain and the world of Tomorrow, then this Steampunk Wrist Monocular should entice you. perfect companion when on board a steampunk-inspired airship or perhaps, a steampunk boat and it is not just for show – it is in fact, a fully functional brass (read: steampunk-esque) flip-action monocular with a modest 2X magnification. granted that is has a less than ideal optical magnification that probably allows you to just vaguely catch a glimpse of the steampunk princess next door but it will, however, complement your love for all things steampunk, and that’s priceless for any steampunk fanatics.
[ad#Google Adsense-text-468×60]

actually, it has a price. it will set you back at $44.99 a pop, not cheap when it comes to just 2X magnification but reasonable for something looking so steampunk-cool. it even comes with a leather arm-pouch that’s weathered to look like it has been past down by your steampunk-era great grandfather. apart from its realistic antique-look brass construction, the monocular sports a flip lever-action opening so you can flip it into action only when you needs it.