Despite it being horizontal, the original Star Trek pinball playfield is a fully functional pinball machine controlled via electronic means. As you can see, it is a sight to behold and the best part is, it is also a coffee table, which means, trekkies who are non-pinball fans can also appreciate the Star Trek shuttlecraft coffee table. Perhaps most importantly, it can sit right smack in your living in all its shuttlecraft glory, cos’ hey, you do need a coffee table after all, right? Though a coffee table, I doubt any appreciative Trekkies would put anything on table top. I know I won’t for two simple reasons: first, to prevent it from getting scratches and second, I won’t want that beautiful 1991 Data East’s Star Trek pinball playfield to be obstructed from my guests’ envious eyes. 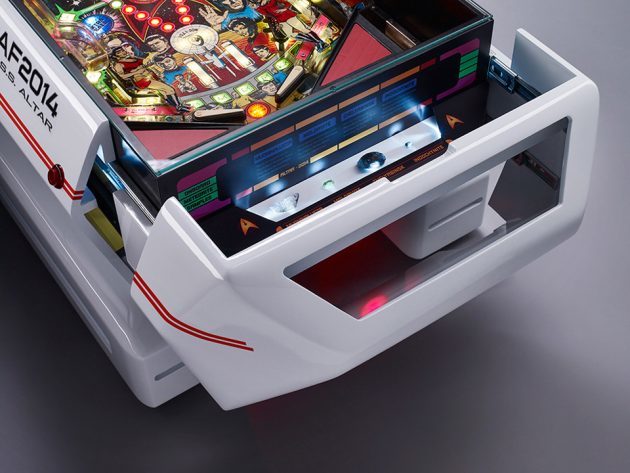 Man, just look at the thing. Ain’t it a beauty? The multi-color LED really makes the table pops. That, plus the three lit Dilithium crystals stored in the shuttle’s cockpit to ‘fuel’ the craft as it darts into dark of the space makes the entire setup pretty surreal, well, in a Star Trek way. Strange that it have those crystals, though, as a shuttle like such wouldn’t have a faster-than-light warp drive, does it? Just saying… anywho, it is not real shuttlecraft, so it won’t fly, much less needing any fictional crystals as fuel. Completing the sci-fi package is the precious cargo onboard, found at its back compartment, which is a quad of real meteorites – labelled, just in case you need to know what they are.