it may not look like an amphibious vehicle, but rest assure that the Amphicruiser is totally capable of handling the water – thanks to its onboard waterjet propulsion which allows it to swiftly transit from land going four-by-four to a water cruising vehicle at a press of a button. and we talked about ‘water’, we are not referring to puddle of water, but a real open lake – just thought we’d make it clear. unlike the Watercar Panther that still has a hint of boat to it, this creation by Netherlands-based Dutch Amfibious Transport‘s capability as a watercraft is completely inconspicuous, which is the beauty of this thing. in fact, it looks more military than civilian – attributed by its matte finish and a la-Land Cruiser boxy appearance. though, it does so at the expense of its water speed, which clocks in at an extremely humble 13 km/h (8 mph) – which is obviously pale by comparison to Panther’s. 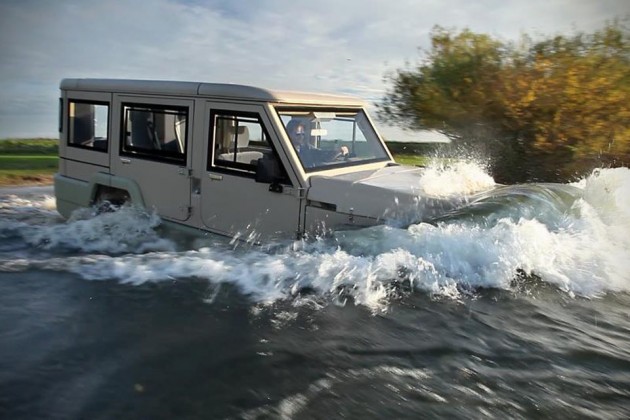 on land, it has a 4.2-liter Toyota Land Cruiser engine that gets the four wheels going, though no information were offered on the numbers, or if the motor was modified. one thing is obvious: the amphibious vehicle’s shell is purpose-built to keep water out and hand-built in stainless steel to counter the bad effects water has on regular steel and though not specifically pointed out, it looks like the bumpers and the side-skirts appears to be some form of floatation contraption, beautifully integrated with the rest of the vehicle. if you think it is ridiculous to be driving a vehicle that looks too much like a boat (you know? those that has a hull with road wheels) and do fancy an occasional dip in your local with the your everyday ride, then this is the set of wheels for you – but be warned that this vehicle is a luxury by itself. prices start €130,000 (around US$180,000) for a 2-door soft top model, and runs up to €180,000 (about US$250,000) for a 4-door, fully equipped model.