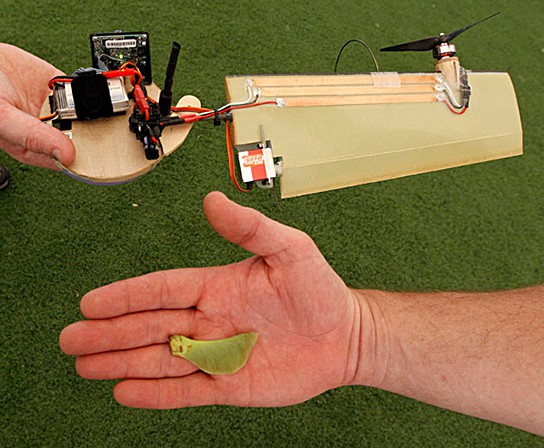 usually when we think aircraft, we imagine them to have a pair of wings or at least two blades. at least that’s how we perceive an aircraft would fly, but that will not be the case for SAMARAI, an unmanned drone that mimics the movement of the sycamore seeds. sycamore seeds are winged samara seeds that are able to travel far from their source of origin, thanks to their single wing that spin along with the wind. developed by Lockheed Martin, the SAMARAI is making its appearance at the AUVSI’s Unmanned Systems North America 2011 (August 16 – 19, 2011), happening at the Walter E. Washington Convention Center. pretty amazing stuff, except that it is making way too much noise but then again, this is just the beginning of this new innovation. on the other hand, i really don’t see how this is going to make it as an operational ready drone in future. isn’t two wings or at least a pair of blades make the flight more effortlessly, and perhaps more silent? check out the SAMARAI flight tests video after the break. tell me that the SAMARAI is not taking a lot of energy to take flight.
[ad#Google Adsense-text-468×60]