what you do in a virtual racing environment should never be practiced in real life. we all know that, don’t we? but what if you could? well, actually you can – with the Anki DRIVE which literally takes your iOS racing to real life, albeit at in a toy scale. SF-based Anki is firm founded back in 2010 and is committed to bringing artificial intelligence and consumer robotics to our everyday lives. that said, the firm is kickstarting that vision off with the Anki DRIVE, an iOS game that blends virtual reality with, well, reality. Anki DRIVE is much like a slot car racing game, but instead of slotted tracks, it has vinyl track mat embedded with positional code that lets the car know where it is in relation to the track as a whole and to other vehicles.

each car is powered by two electric motors and comes complete with a microprocessor, a power button, multicolor status LED, a rechargeable battery pack and Bluetooth LE radio as the link to your iPhone. the wonder of this little machines is the use of AI that evolves as the game progresses. the car is near-autonomous; they can actually drive themselves around the track perfectly fine, but the fun parts come when you make the final calls such as deciding whether to make a wider or sharper turn to effect the race, and much to our delight, unleash special weapons at your competitions. for starter, there are a couple of weapons to go with; one tractor beam that slows down your opponent and a gun to get rid of your competitions. well, it sure sounds like a chance for us all to play out Death Race, but with more futuristic cars instead of some put-together, post-apocalypse rides.

speaking of futuristic cars, these miniature racers are actually the handiwork of Harald Belker, the same person who designed the 1996 Batmobile (Batman and Robin) and the vehicles seen in Minority Report and Tron: Legacy. like the gaming norms, the player’s performance is match to the number of medals or points awarded and the cars are “virtually” upgradeable too, with qualities like faster speeds or more energy or better weapons, and those upgrades will be reflected the next time you hit the track. though it noteworthy, with the AI in the play, your opponents might also be growing stronger and more lethal too.

the Anki DRIVE starter kit is set to be available on October 23 for around $200. each kit comes standard with a 2.6 m by 1 m track mat, and two cars for you to start off. if desired, additional cars can be purchased for $69 ea. when the product goes on sale. scroll down to take a closer look at the cars and scroll down further for a promo clip of the Anki DRIVE. 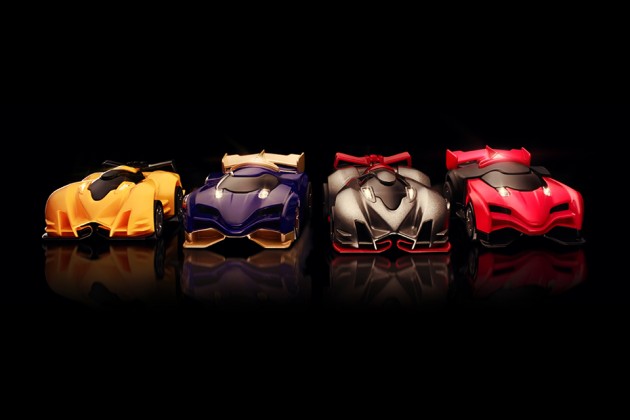