so you got yourself a speedy broadband or fiber service, now it is time to do that speedy Internet of yours some justice by hitting up on the latest WiFi standards, the 802.11ac, with devices like the Apple AirPort Extreme ($199) and the AirPort Time Capsule (from $299). featuring a three-stream 802.11ac WiFi technology, both devices boast a peak transfer rate of up to 1.3Gbps (that’s about three times faster than the then fast 802.11n standards, if anyone is counting) for some seriously fast data transfer. built into the AirPort Extreme are high-powered radios and a six-element beam-forming antenna array (three for each band) for range and performance, and offers ease of setup for both OS X and iOS. the AirPort Time Capsule, on the other hand, is essentially the AirPort Extreme blessed with up to 3TB hard drives (heck, they even looks the same) suitable for use with Time Machine for regular automatic backup.

both devices feature simultaneous dual-band (2.4GHz and 5GHz) support that automatically switches to the best available band for fastest possible performance. and with the beam-forming feature, it is smart enough to know where your 802.11ac is on your network and directs the signal to it, thereby treating your connected device to a stronger WiFi signal. last but not least, the duo sports an exceedingly minimalist vertical design that not only boosts the WiFi performance, saves you valuable desk space with its significantly smaller footprint, but it is also Apple-isque pretty so that you won’t be ashamed to place it just about anywhere in your home or office. another look at its available connectivity after the break. 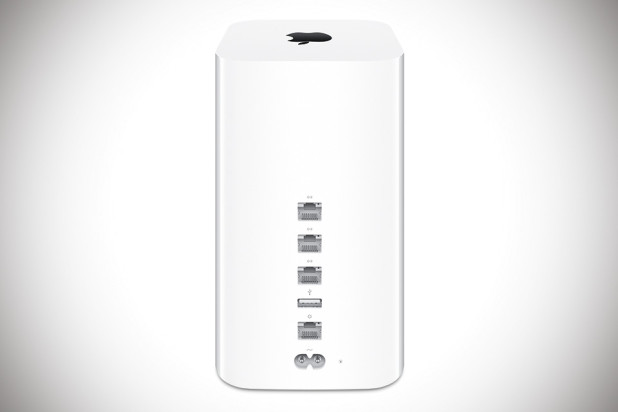