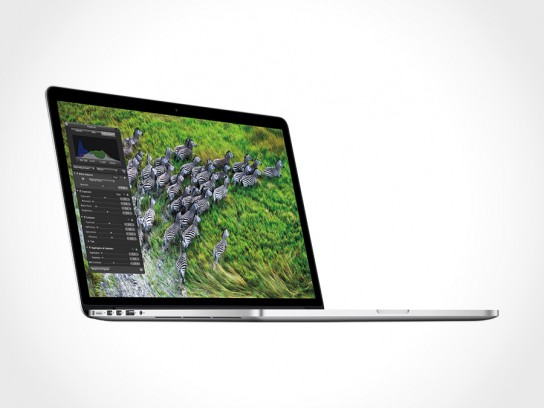 you probably already have heard about this. Apple’s eye-popping Retina display has just made it to the latest 15-inch MacBook Pro. boasting a 2880 x 1800 pixels resolution with an astounding 5.1 million pixels in total, the MacBook Pro with Retina Display is now the highest resolution laptop display in today’s market. like its smaller counterparts, the Retina display promised to offer pixel density that is so high that our human eyes will not be able to discern the individual pixels, which also means that we will be enjoying pin sharp text never before possible. you have seen the Retina display works on iPhone 4 and the new iPad, so you can imagine what it’s going to be like on a 15.4-inch IPS display. it should be nothing short of breathtaking. unlike the new iPad that got a slight bump up in weight and thickness after receiving the Retina Display, the 15-inch MacBook Pro turns out to be much thinner and lighter. it is now 25% thinner at just 18 mm thick (0.71 inch) and weighs in at 2.02 kg (4.46 lbs). along with Apple’s signature sleek form, the MacBook Pro comes packed with up to 2.7GHz Intel Core i7 Ivy Bridge quad-core processor with 6MB shared L3 cache, up to 16GB of DDR3L RAM, up to 768GB of flash storage, both Intel HD Graphics 4000 and NVIDIA GeForce GT 650M with 1GB of GDDR5 memory, FaceTime HD 720p camera, a SDXC card slot, HDMI port, a pair of Thunderbolt ports, two USB 3.0 ports, headphone audio jack, and last but not least, the MagSafe 2 power port. along with the improvements are regular features such as wireless networking (a/b/g/n), Bluetooth 4.0 wireless technology, stereo speakers, dual microphones, full-size backlit keyboard, multi-touch trackpad and a battery life of up to 7 hours of usage and up to 30 days of standby time. the Apple MacBook Pro with Retina Display is ready for your taking now with a starting price of $2,199.