Apple, like so many big corporations, has the addiction for patent. The Cupertino-based tech giant may not be the biggest patent holder among tech companies, but it has a significant number of them and what this means is, the things that get patented can sometime turns out to be rather quirky, like for examples, a paper bag and even a pizza box. Yup. You heard that right. A pizza box, but being a patented pizza box, it is certainly not your usual run-of-the-mill brown cardboard-based square box. In fact, Apple’s very own pizza box, which the company has been using in its cafeteria, makes a lot more sense because it is round and as we all know, pizza is round. 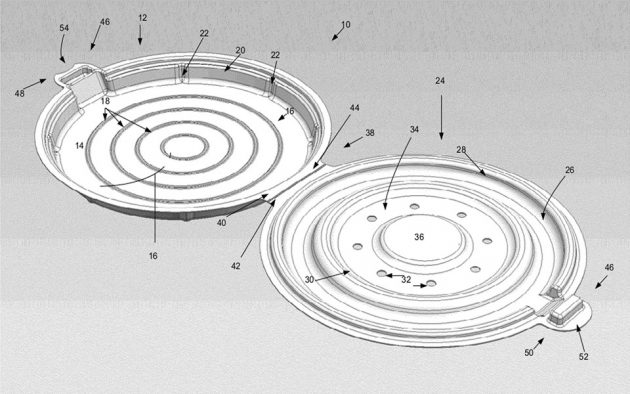 According to The Verge, the box is apparently sized for personal pies and further report suggests that the existence of this round pizza box is for staff to bring the pizza from the cafeteria to their desks. Well, I am not surprised, as Apple is known for staff welfare, but I am surprised that it would encourage staff to eat at the desk (if the said report is true) because, according to some study from many years ago, office desk turns out to be dirtier than a toilet seat. But we are not discounting the possibility that this food container is for employees to take the pizza to a rest area, or elsewhere in the campus to consume; not necessarily their desks.

Unique to this patented pizza container is a ribbed pattern, presumably for strength and also to prevent the pizza’s bottom from coming in full contact with the box, a proper locking closure to keep it closed when it supposed to, and some holes on the lid for circulation so it won’t have trapped warm air that will threaten the crust’s crispiness. The latter is kind of frivalous, since current square boxes have proven that it works just fine. But I guess to Apple, attention to details rules.