art takes on many forms. we all know that, but one that involves bike saddle is, well… refreshing, especially when you have taxidermy in the mix. the concept of combining taxidermy with a bicycle saddle seems hard to grasp, but when you look at Canadian artist Clem Chen’s Taxidermy Bike Saddle, everything kind of makes sense now (but we didn’t say they aren’t creepy). the amazing feat is how Chen has managed to fuse plastic-cast taxidermy molds into the saddle and make them look so natural and yet, creepily realistic. entitled “Bite It” and “Pink Eye”, the seats were craved open (we prefer to call it ‘dissecting’, actually) to facilitate the insertion of the respective taxidermy molds.

the parts are then adhered together with construction adhesive and two-part epoxy glue, while epoxy putty were used to complete the additional sculpting. the life-like appearance is achieved with acrylic paint and the body (i.e. the saddle) was given a matte-black spray finish that makes the ‘star feature’ aka the largely glossy plastic-cast taxidermy even more outstanding. as you can see from the images, “Bite It” features a ferocious, snarling mouth, presumably of a dog’s, and the “Pink Eye” (which is not literally pink, btw) is a single, glassy creepy eye. these works of art first appeared at ‘Saddle-up!’ show at the Hot Art Wet City Gallery in Vancouver, BC, where local artists whipped out their artistic touches to reinterpreted the otherwise ordinary-looking saddles.

NOW READ  How Do You Like A Luxury Leather Bag For Carrying ONE Watermelon? 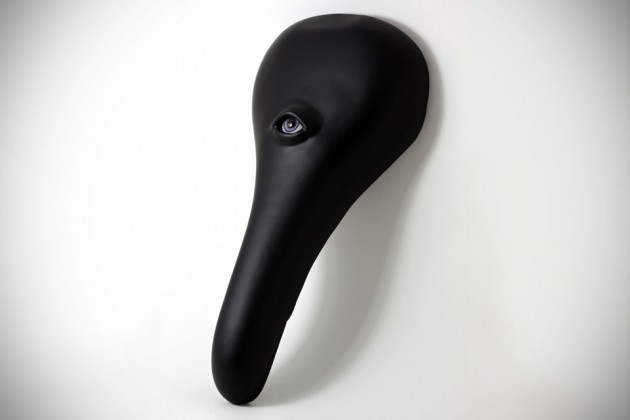