we don’t work as border security or law enforcement of any sort, but we imagined folks working there would have at one point in time wished they had x-ray vision like the frictional superhero Superman. that would make things a whole lot easier, wouldn’t it? imagine negating the need to direct automobiles or aircrafts to a big ass x-ray scanning machine, if there’s even one, to scan for potential illicit items such as drugs, cash and more. well, imagine no more, cos’ AS&E (short for American Science and Engineering), maker of x-ray detection systems, has announced a handheld Z Backscatter imaging scanner known as Mini Z. the Mini Z here is essentially an x-ray gun that blasts low-level x-rays over variety of material, thereby allowing for fast and efficient detection of conceal organic threats such as drugs, plastic guns, ceramic knives, and even explosives.

with Mini Z law enforcement agencies such as border and custom agents, military personnel, public safety officials, can now bring the equipment to the suspected vehicles or cargoes to scan them for any potential illegal goods, and on top of that, being handheld, it allows the object to be scanned at different angles to result in a clearer image, which means a more throughout check. the handheld backscatter is based on the company’s larger version found in airport terminals. AS&E managed to shrink down the essential components and stuff them into a compact device no bigger than some professional video rigs. holding like a video rig, the user scans over the area of concern as the x-ray gun fires off photons. the photons hit the organic matter, scattering and ricocheting, which are then picked up by the sensor on the device to result in an x-ray image displayed on a Windows-powered tablet PC..

the ability to shoot continuous ray is described as the key development that made this portable x-ray scanner a reality. of course, there are several crucial innovations such as cooling system, battery and more that makes the entirety a possibility. the Mini Z is, naturally, destined for law enforcement agencies and military uses and hence, the 50 grand price tag. at the price of a luxury ride, the Mini Z X-Ray Gun is no doubt astronomical by layman’s standard, but as far as Pentagon is concerned, that’s only half the cost of a full-size backscatter x-ray used in airports, which makes it an rather attractive proposition. and that’s not to mention the intangible benefits such as a more efficient detection that previously not achievable. 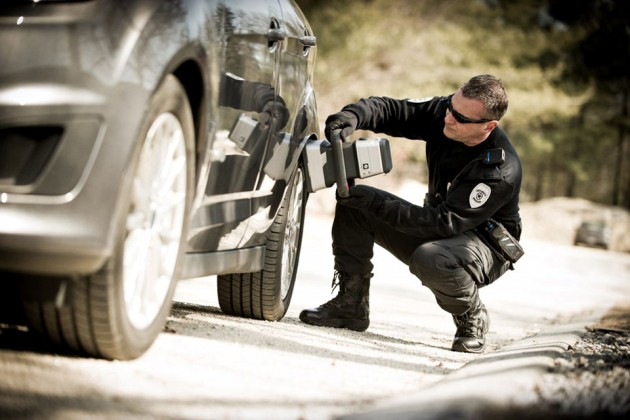 AS&E via Defense One

all images courtesy of AS&E