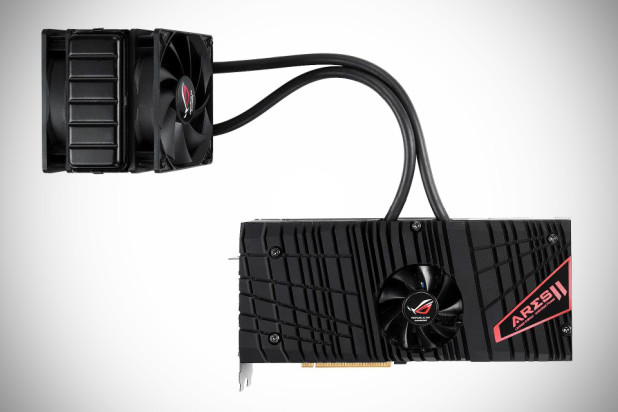 seriously, PC gaming are getting more complex with more polygons being thrown into them and as such, a lone graphics card is not going make the cut – you will need a beefy graphics card to shape up those polygons and have an upper hand over your multiplayer foes. the new ASUS Limited Edition ROG ARES II Graphics Card is one such graphics card that will offer the firepower you will be needing. boasting dual Radeon HD 7970 GHz Edition GPUs and 6GB GDDR5 VRAM, this graphics card is going to rock your virtual world with 1100MHz core clock speed and while you at it, the extra-efficient heat dissipation offered by its new hybrid thermal design utilizes liquid and air to quell the heat to insure that your gaming experience goes on without a hitch. other highlights include an exclusive ASUS DIGI+ VRM and Super Alloy Power technologies for greater stability, bundled ROG Edition GPU Tweak utility for fine-tuning the graphics (including overclocking for the obsessively power-hungry gamers), a hybrid cooling system consisting of a 120mm fan block fanning a closed-cycle liquid system, an 80mm dust-proof fan aid in cooling the VRAM and other critical components and supports resolution of up to 2,560 x 1,600. only 1,000 units of the ROG ARES II will be let loose into the wild with each piece packed in a special ROG-themed case and each card laser-etched with serial number on the aluminum backdate as a stamp of exclusivity. man. with this graphics card, you really have to have a transparent PC case. pricing and availability are yet-to-be-announced.