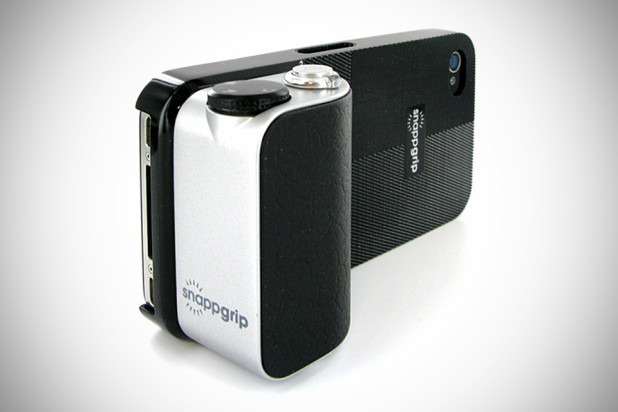 are you working hard towards being a pro-iphonegrapher? if so, London-based Lee Harris have something that you might need to make that happen (skills not included, of course). the product in question is the SnappGrip, a smartphone case (a pretty snazzy one, if we might add) and camera controller combo that turns your iPhone 4/4S/5 (or Samsung Galaxy S III) into a ‘real’ camera. the case itself is pretty much self-explanatory and as for the controller, well, it basically gives you the convenience of operating your iPhone like an actual camera (even one-hand operation), complete with physical buttons for shutter, zoom and even shooting modes (portrait, landscape, flash and video). along with the functional controls, the underside of this awesome attachment features a standard 1/4″ tripod mount, a power on/off switch for your camera controller, as well as a micro USB port for juicing the device up. yes. this accessory runs off its own battery and communicates with your iPhone or S III via the trusty Bluetooth connectivity. turning your phone into a camera is as simple as snapping the attachment to the included case, pair the camera controller with your device and you should be all set to go. awesome concept but well, it is not a concept per say cos’ the SnappGrip smartphone case with camera controller is up on crowdfunding platform, Kickstarter, seeking your support where a pledge of £29 or more will secure yourself one with shipment expected to be on February 2013. available for both iPhone and Samsung GALAXY S III.