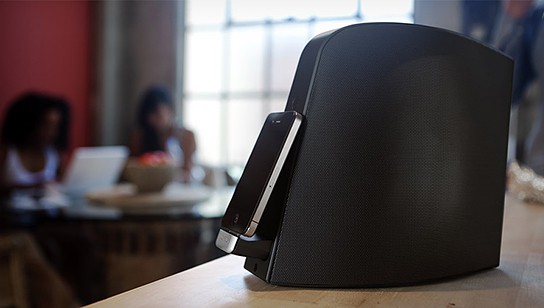 the world just can’t enough of sound dock and the latest to join the slew of sound dock is the South of Market (or SoMA) Audio Dock from Audyssey. despite its small package, the SoMA promised to deliver big sound, thanks to the DSP chip and Audyssey proprietary software that enhances, and improve the hardware performance. also incorporated into this sleek audio dock is Audyssey EQ technology that ensure that your ears hear nothing but rich and balanced sound.
[ad#Google Adsense-text-468×60]

its deep bass is delivered via a pair of 4-inch woofers (yes, Audyssey managed to pack those in as well) which are driven by separate amplifiers. i would say it is an electronic design feat. from the image, you can tell how small it is even without me telling you the size of this audio dock. other features include Bluetooth technology that allows music to be streamed wirelessly from any Bluetooth-enabled devices and a dual microphones setup let the audio dock doubles as a speakerphone which you can use for conference calls via GoToMeeting or Skype. if that’s not enough, hook up this baby to your computer and it becomes your computer speaker which also lets you charge and sync your iPhone or iPod.

for music connoisseurs, you can even download a free app to create personalized EQ curves to suit your personal music taste. though it all sounded as good as it can get, the Audyssey SoMA Audio Dock’s price tag isn’t for the faint of heart. one of these unit will set you back at $399.99.

NOW READ  Soundkraft The Enigma Has An Enclosure Handcrafted From Mangowood