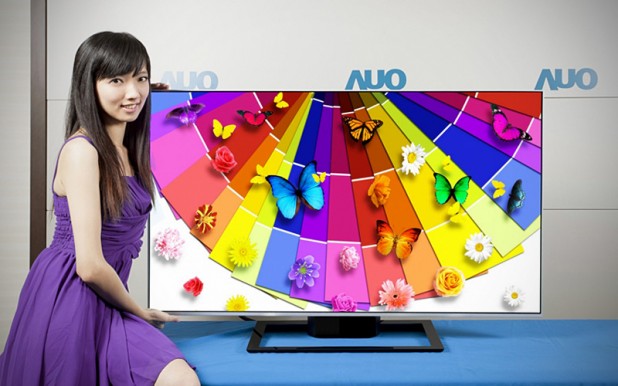 looks like the race for Ultra High Definition TV is official but to date, what we heard and read about are screen sizes that are less than practical unless you have a colossal living room. however, for those yearning for a 4K resolution display without the whopping size, you can look forward to specialist panel maker AU Optronics aka AUO’s slightly more practical 65-inch UHTV. however, it is not just its utilitarian size that makes it stands out from the stream of 4K TVs being introduced in recent time but it is the technology that goes under the hood. according to AUO, it 65-incher 4K TV is based on the indium gallium zinc oxide (IGZO) semiconducting material to achieve the 3,840 x 2,160 resolution as opposed to the low temperature poly silicon (LTPS) substrate, commonly used in today’s HDTV. the IZGO display panel is said to be able to deliver stereoscopic pictures with better image depth and most importantly, it is less costly to manufacture. also, it is said that this technology offers “superior light transmittance and thinner body” which eliminates the need for full-array LED backlighting to achieve an uniform level of brightness and it can be used along with IPS LCD technology for improved viewing angles. you may not heard of AUO but they are seasoned player in the LCD panel manufacturing that has major clients including Samsung, Sony, Philips and Toshiba. all told, it only means good news for visual connoisseurs in near future as the industry big players might follow suit in using the same with the possibility of 4K TV that won’t cost an arm and a leg and a thin form factor despite being larger in screen sizes. the latter is something we feared most: new display technology that’s going to bulge things up again. in any case, no word if the AUO 65-inch 4K Ultra HD TV would be commercially available.

AU Optronics via Hardwarezone via HDTVtest