This is it. The much anticipated entrant to the EV market BYTON’s first EV has finally been unveiled in Las Vegas, at the CES 2018. So, as speculated/guessed, it is indeed a SUV. No model name is associated it, though. The China-based EV maker simply refers to it as a ‘Concept’, but from the looks of it, it is hardly a concept; it looks like it is destined to roll off the company’s Nanjing plant in due course. Anyways, expect this mid-size “premium” SUV with sweeping roofline to be offered with two power options: a 200 kW single motor rear-wheel drive model with 400 Nm of torque and a 350 kW dual motor-equipped four-wheel drive model that turns out 710 Nm of torque. 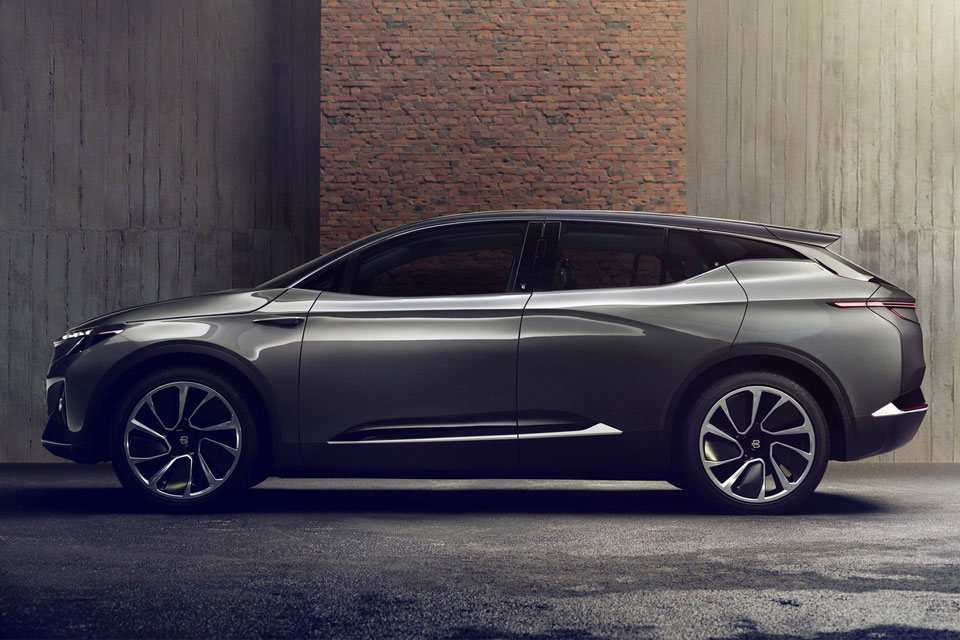 The rear-wheel drive variant is paired to a 71 kWh battery system and has a range of 400 km (248.5 miles), while the four-wheel drive model has a 95 kWh battery pack that offers up to 520 km (323 miles) range. Speaking of battery, BYTON said that its battery pack can be recharged to 80 percent in just half an hour in fast charge mode. In addition, there’s the battery swap program that quell the distaste for longer-than-pumping-gas time charge time. BYTON concept is build on an all-new platform designed with electric vehicles in mind. 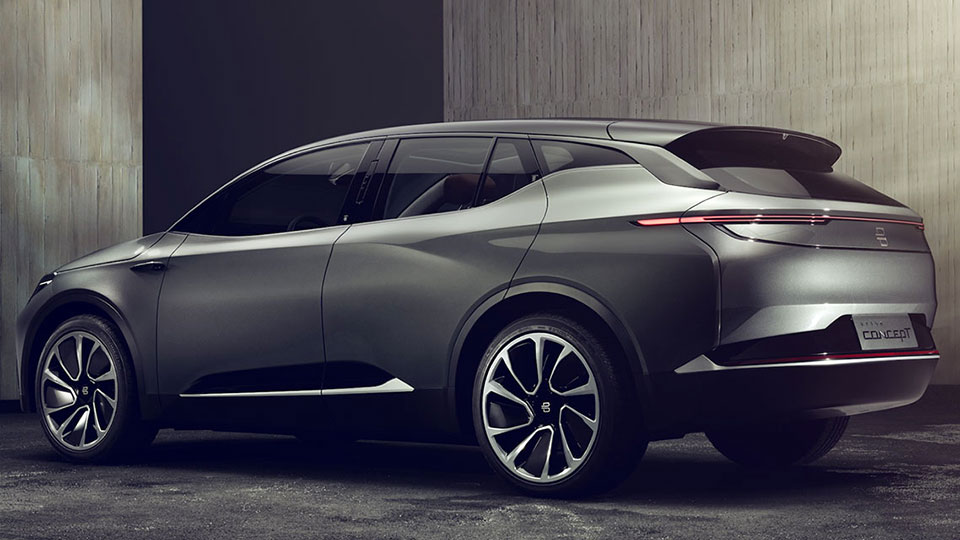 BYTON is referring it as a “mid-size” SUV, but it looks pretty large. Even the numbers said so. Its 4,890 mm (15.9 feet) length is complemented by a generous 2,945 mm (9.6 feet) wheelbase. In addition to the fancy, high-tech interior, BYTON Concept also boasts an innovation called “Smart Surfaces,” which, TBH, I have no idea what it is after reading the statement for like ten times. Anyways, here are the official words on “Smart Surfaces”:

“BYTON Concept leverages Smart Surfaces beginning with the front grill. LED lights throughout the front highlight the luminescent logo in the middle, along with connecting lines and dots that can switch to different display modes to suit different driving scenarios as well as communicate with users and pedestrians. The rear of the car also adapts the Smart Surfaces design.” 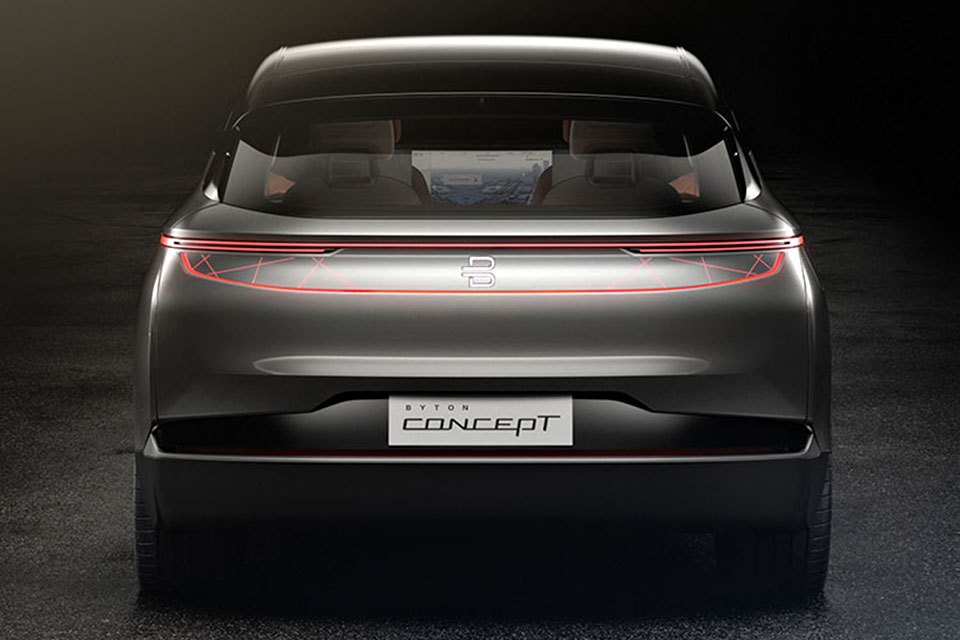 There’s a lot to digest about BYTON Concept, but we try our best not to bog you down with words. So, here goes… It will roll on giant 22 inches wheels, it will have luxury materials like wooden floor (yep, wood!), leather seats and color-matched interior. It will have front seats that can be rotated 12 degrees inwards, so you put down your phones and start having real conversation. Embedded B-pillar on both sides of the car are three facial recognition cameras for unlocking the car and it can even recognize driver and passenger information to auto-adjust seat angles, entertainment options and what not. Basically, BYTON Concept is like a smartphone on wheels. 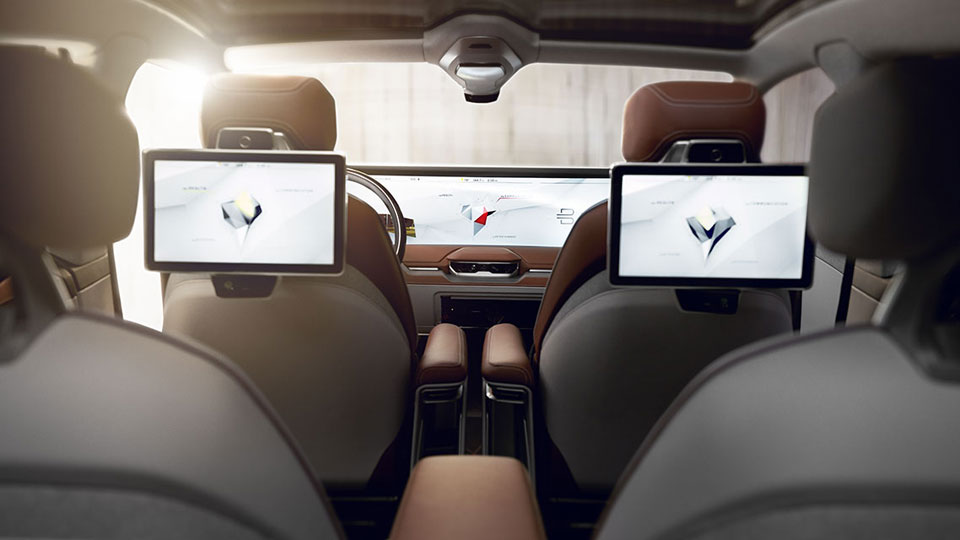 Interestingly, the profile of the drivers are stored in the cloud and that is to say that, whichever BYTON you sit in, BYTON will be able to recall your profile so every BYTON will feel just like yours. Also, BYTON envisioned that you not touch your smartphone when in it. Everything you need on your smartphone is on the car and you will need not to physically touch buttons or screens to work on it; gesture recognition will replace physical touches and amazingly, you can perform gestures at any position within the car. If that gestures are not enough, there’s voice control system, made possible by, you guessed it, Amazon Alexa and apparently, it will be ready for 5G communications too. 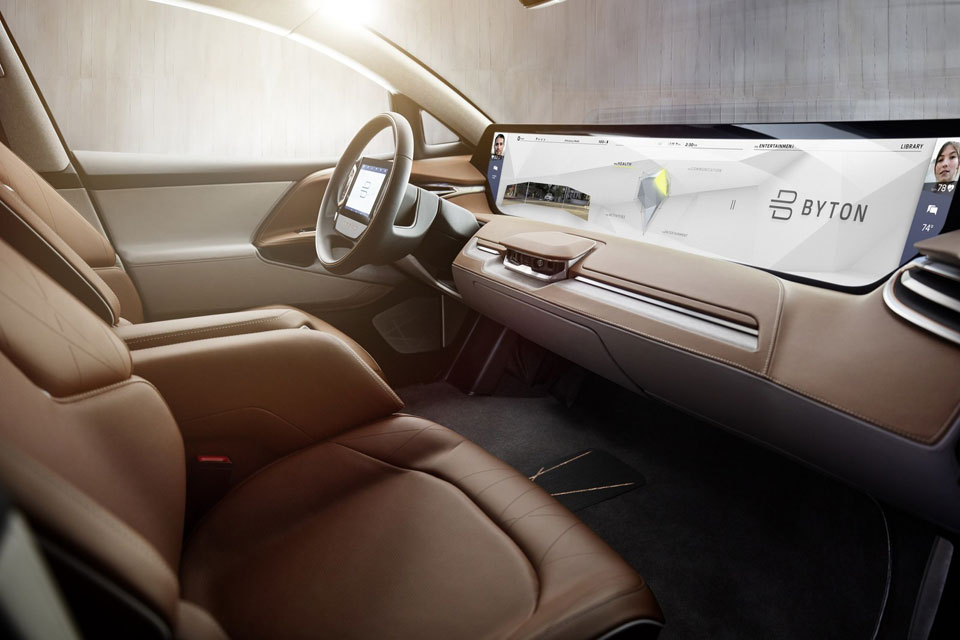 Cameras are not limited to the B-pillar; they are embedded on the sides of the car too to take the place of the side mirrors which result in a strangely smooth flowing side lines, made even more smoother by the invisible door handles and invisible antennas. As reported earlier, BYTON Electric SUV is expected to give Tesla for a run of its money in 2019. After which, a sedan and MPV (AKA minivan) is to follow in 2021 and 2022, respectively.

As to how it will ‘give Tesla a run for of the money’, well, it is by the tech and also the pricing which, we read, will start at about $45,000 for the base version of the car. What a bumper, isn’t it Elon? Just when you trying to make Tesla make real money…

All images courtesy of BYTON.