CASIO has unveiled a new collection of limited edition G-Shock wrist watches ahead of its 35th anniversary. The collection includes four existing G-Shock models, including GW500 (GW5035A-1), GG1000 (GG1035A-1A), GA700 (GA735A-1A) and GA100 (GA135A-1A), and a brand new model, GA800 (GA835A-1A), which will in matte black finish, especially developed in celebration of the brand’s 35th years. The watches will sports a gold IP band keeper with the words “SINCE 1983” and gold IP case back decorated with G-Shock 35the anniversary logo.

CASIO has gone beyond aesthetics for these anniversary watches to include additional functions such as, for examples, mud-resistant structure and G-Shock’s twin-sensor technology of a digital compass and thermometer on the Mudmaster GG1035A-1A, 3D bold hands, a five-year battery and a hand retract function on the GA735A-1A, and the GA135A-1A gets magnetic resistance, a speed indicator and mute function. Finally, the GA835A-1A anniversary iteration now sports a thinner, mid-size case, along with a three-hand combination analog-digital display, dual time and LAP memory. 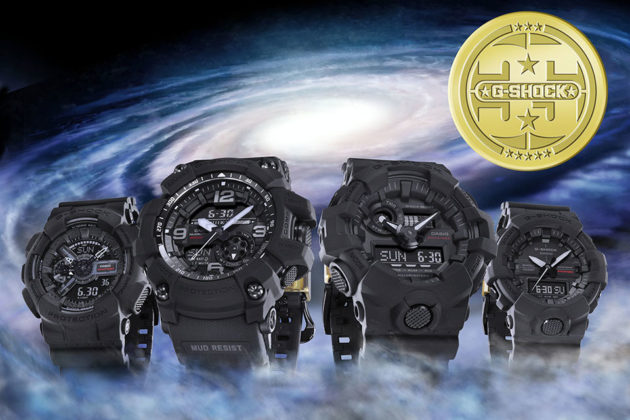 In addition to the additional features not found on the regular varieties, you can expect the usual G-Shock features and functions, including 200M water resistance and shock resistance, world time of up to 31 time zones, multiple daily alarms, a stopwatch and countdown timer, EL or LED lights, and 12/24 hour formats. In case you are wondering about the case size of each watch like I do, the GW5035A-1 has a 42.8 mm case size (not my cuppa, really), but the GW1035A-1 and GA735A-1A sports humongous sizes of 55.3 mm and 53.4 mm that makes me go woooo… I like! Though I can’t say the same for the pricing, but more on that in just a sec.