Nope. What you see here is not the new emblem for the next Marvel’s Guardians of the Galaxy comics. It is a custom designed mission patch that will see real world, or rather, space use. It is an official mission patch that will find its way on all payloads heading to the National Laboratory on the International Space Station (ISS). Announced at the San Diego Comic-Con by Center of the Advancement of Science in Space, or CASIS in short, the patch features Marvel’s space dwelling heroes, the perennial plant Groot and the highly intelligent, anthropomorphic raccoon Rocket, against a space blue backdrop decorated with the silhouette of the space station, along with stars which are actually the flame found on the Guardians of the Galaxy shield. 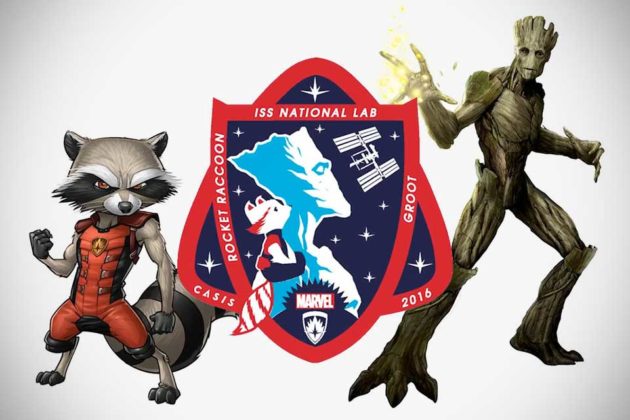 The artist behind this new mission patch is avant-garde illustrator Juan Doe who is known for his line art style illustrations. Not surprisingly, Doe have had his hands on several Marvel comics covers, including our favorite Iron Man Legacy #6, and if you have seen his works, you will immediately recognize his unique style on the mission patch. All this while, NASA has been rather formal in educating the public about the works carried out by astronauts/researchers on the low Earth orbit habitable satellite, but with the comics characters-infused patch, the U.S. national space agency, specifically CASIS, hope to draw more attention to ISS National Laboratory and “bring hope for what people can accomplish in the future.”

The mission patch is looking mighty awesome and we think CASIS should totally make it into a souvenir patch and if they do, I will be among the first in line to grab it. I promised. You can learn more about the new CASIS mission patch in the video after the jump.