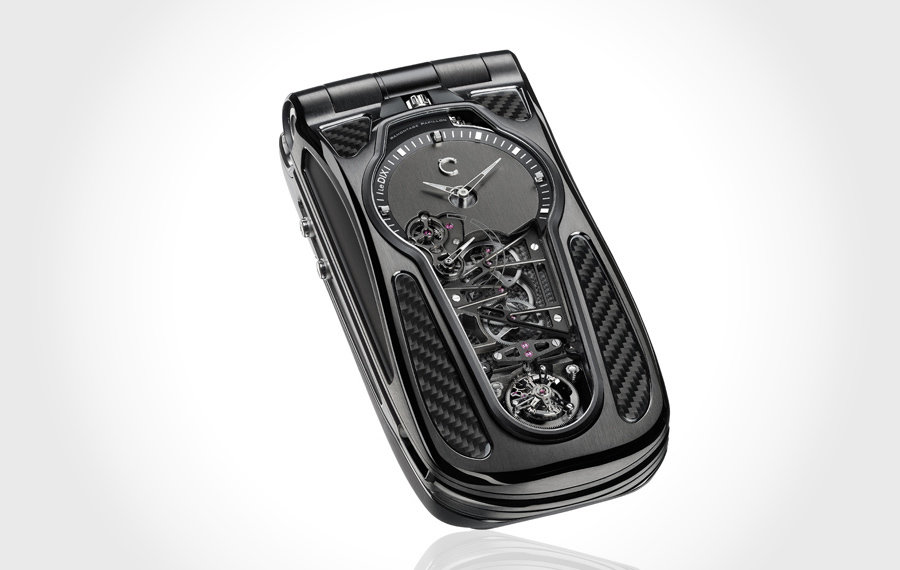 in an age where standard mobile phones are being pushed into oblivion, there still exist an elite group of them, waiting to be snagged by the rich connoisseurs of mobile phone, luxury jewelry and intricate time pieces, combined. created by a young French watchmaking firm, Celsius X VII II, the LeDIX Furtif you see here is just one those luxurious mobile phone that cost a whopping €250,000 or US$333,675 to own. it is a standard clamshell form factor mobile phone with standard features like onboard camera, VGA display and the likes but what makes the whole package stands out is its integrated mechanical watch with an off-centered flying tourbillon on its front and a full carbon fiber body. and we are not talking about just bits and pieces of carbon fiber stuck to it but a phone structure crafted completely out of solid carbon fiber. another highlight is the patented mechanical hinge known as Remontage Papillon that serves to harness and store the kinetic energy when the opening and closing the clamshell phone, adding 3 hours of power reserve to its 100-hour reserve. the Celsius X VI II LeDIX Furtif Mobile Phone was first showcased at the BASELWORLD 2012 in March. hit the jump for a few more look.

NOW READ  Écrou De Cartier: Threaded Bar And Nuts As Jewelry Because Why Not?