If you find even the thickest book does not posed a challenge to your reading ability, then congratulation, you are all set to take on the next level of ‘reading’ with this intricately crafted wooden book called Codex Silenda. However, words are not only thing you will find inside Codex Silenda; each page is a brain-teasing mechanical puzzle which you have to solve in order to progress to unfold the story. Here’s the essence of the story of Codex Silenda:

“As the puzzler moves through the book, a story begins to unfold, depicting the story of an apprentice in Da Vinci’s Workshop who encounters the same Codex. However in the story the Codex acts as a trap set by Da Vinci to capture any would be spies/snoopy apprentices in order to protect his work. The only way to escape is to solve each of the puzzles before the master returns from his trip. “ 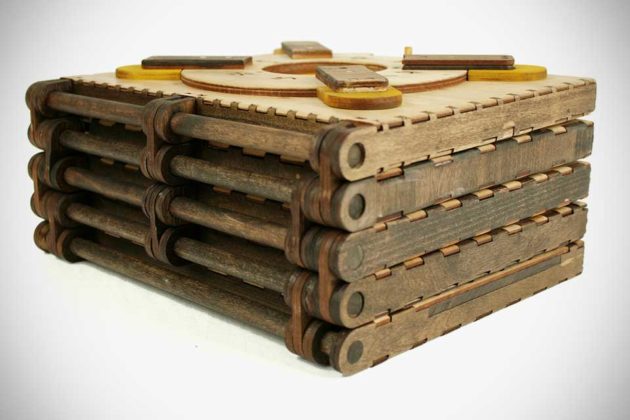 Codex Silenda may have just five pages but it will probably take you more time to ‘read’ than a 500-page novel and possibly, leaving your brain completely exhausted by the time you reach the end of the book – that’s if you ever get there. You can’t jump page either as the puzzle on each page needs to be solved to unlock the following page.

Limited quantity of the Codex Silenda: The Book of Puzzles were put up on Kickstarter which, amazingly, were all spoken for in a matter of days. Yup, that’s right, ALL of them have snapped up, which is a rare occurrence in crowdfunding. There’s a glimmer of hope though for those really want a copy; Brady Whitney is inviting these people to be on a waiting list. However, the next batch of Codex Silenda will likely to be available only in 2017 since Brady and his team have to fulfil the pledges made in this campaign by this year end.