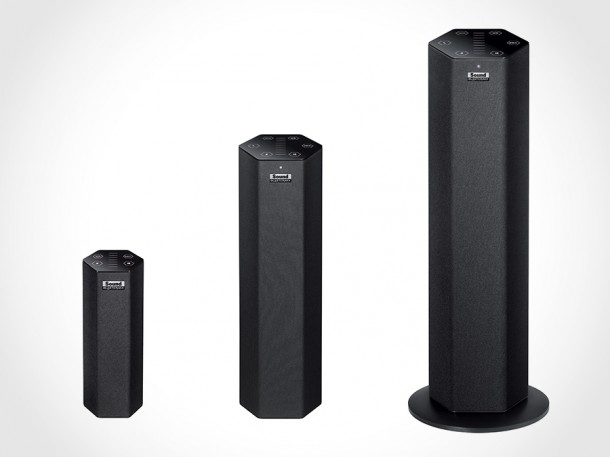 still betting on Creative will thrill you with something awesome? well, your dedication for this soundcard pioneer might just be paying off. Creative has announced a brand new speaker system dubbed as the Sound BlasterAxx, which we thought look pretty sleek. the Sound BlasterAxx is a versatile hexagonal tower style speaker that is designed for use with PC, Mac and today’s mobile devices such as smartphones and tablets. features include SB-Axx1 multi-core audio processing chip, intuitive backlit capacitive touch controls, USB-powered, twin-speaker drivers arranged in a “stacked stereo” design, Bluetooth connectivity, dual-microphone array that allow it to be used as a hands-free speakerphone, 3.5mm auxiliary in, 3.5mm headphone audio jack, Noise Reduction, Voice Focus, and a rather strange feature known as VoiceFX that let users add effects to their voices. frankly, we don’t see much purpose in that. anyway, the Sound BlasterAxx Series come in three models: the SBX 20, SBX 10 and SBX 8. only the former two models will sport both Bluetooth and USB 2.0 connectivity. the SBX 8, which is destined for use with computer use, comes with USB 2.0 only and employs single microphone, instead of a dual-mic setup. the SBX 10 and SBX 8 will hit the stores this July with stickers of S$199 and S$129 (about US$155 and US$100), respectively. the SBX 20 will be available from mid-August for S$279 a pop (about US$217).