We must be living under the rock when our minds were blown by Sennheiser’s 14-speaker sound bar. Clearly, we have not hear about Creative’s monstrous offering. Now, the Singapore-based, publicly-traded tech firm is not quite known for audiophile-grade equipment – much less audiophile-grade sound bar, but that does not stop the granddaddy of PC sound card from taking on the less traveled road. Before you can audition, or read about the features the company’s X-Fi Sonic Carrier Dolby Atmos Sound Bar has to offer, it already have one thing that will blow your mind and that’s the price tag. The Creative X-Fi Sonic Carrier commands unworldly sum of $5,799. 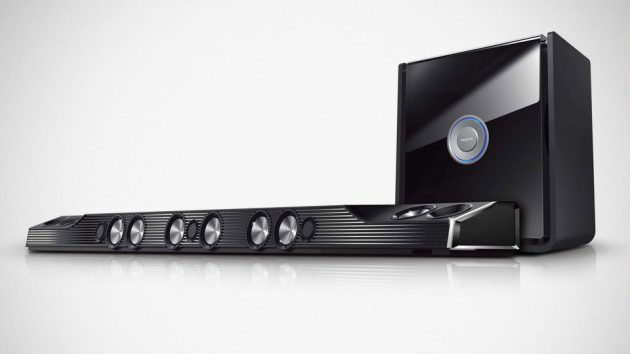 Imagine that! A $5.8K sound bar! Holy mother of… Never mind if sound bars can ever be of audiophile-grade because, clearly, this monster sound bar here has enough drivers to create bring the house down. With no less 17 drivers (!) packed into its CNC machined aluminum, double-walled enclosure that stretches nearly 5 feet long (1.52 meters) and a 60 lbs sub that is so large that it will be mistaken for a piece of furniture, the X-Fi Sonic Carrier is rigged to pump out a mind-bending 2,000W Peak Power Output (1,000W RMS). Now, that’s another holy shit moment there.

There’s more: Creative said it had 60 engineers dedicated to R&D of this monster sound bar and within it, it has a total of 8 processors, 4 wireless systems (WiFi for separate audio and video streaming, Bluetooth, and zero-latency wireless sub link), and over 400 screws that holds everything in place. The 17 drivers, which provides 11 front and side-firing channels, consist of 6 mid bass drivers, 3 super tweeters, and 2 full-range drivers. The 2 side-firing full-range drivers are responsible for the cinematic magic known as Dolby Atmos (or EAX 15.2 DSP), so you’d get the feeling of being engulfed in the action without the need for additional side and rear speakers. 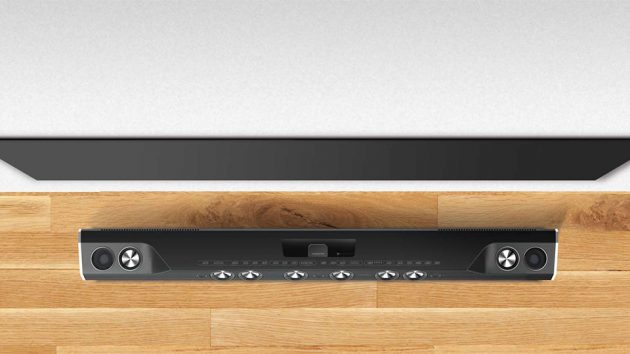 Also, the mega size sub ain’t no ordinary sub; it is a 2-channel sub that, like the sound bar, benefits for visual bling, courtesy of RGB lighting. Furthermore, X-Fi Sonic Carrier is loaded with connectivity options, include 4 HDMI inputs (3 rear; 1 front), HDMI (ARC) out, 3 USB ports (2 front; 1 rear), a microUSB service port, a Gigabit Ethernet port, a pair of optical inputs, a set of analog input, a sub-out, two line out, and there are 2 microphone inputs, an auxiliary input and 4 SD card reader around the front. So, who’s up for some karaoke action? 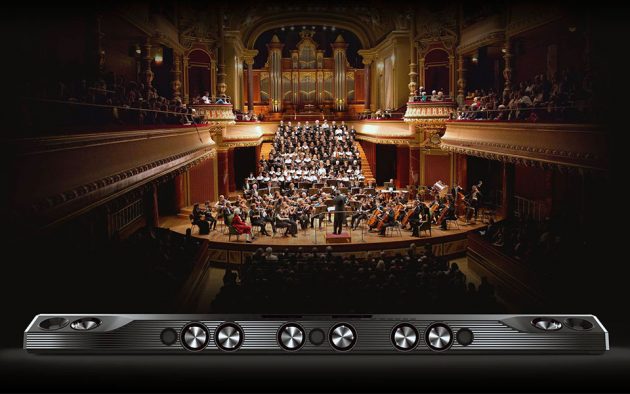 WiFi with DLNA, Miracast, Chromecast, Spotify Connect are all supported too. Also, it has the full blessing of Super Wide X-Fi, as well as DTS:X. The only things it lack are Google Assistant and Amazon Alexa. Anywho, as you can see by now, this thing is monstrous in several departments: the sound, the price and the size. Speaking of size, it might be a concern because, at 3.8 inches (96 mm) thick, it is likely to consume the bottom of some TV sets, thus blocking the IR.

This is where the IR transmitter found at the back panel will come in handy. If the bar blocks the TV’s IR receiver, all you have to do is to connect the supplied IR blaster to the Sonic Carrier and you be able to control your TV through the sound bar with the original TV remote. The feature list is pretty out-of-this-world. It is definitely out-of-this-world enough to justify the asking price. After all, there must be a reason it is being called “soundbar of the gods.”