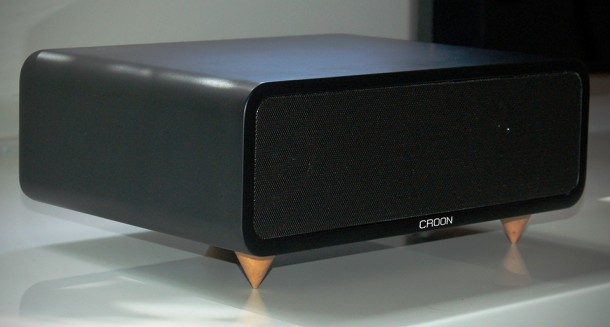 Croon The Original Sound System | from US$199.99 | croonaudio.com

one thing we can be sure of is, music lovers desperately wants to be unwired. fortunately for us, the market is not lacking of choices. we can either go products from the big players with proven track records but sometime less appealing design or we could go for the under dogs with a few tricks up their sleeves. and when we said under dogs, we meant those little guys. one such example of the little guy is The Original Sound System from Croon Audio. never mind the fact that we are rather confused about the existence of +KNOB and Croon Audio simultaneously (with the same product, no less) but we are more interested in the product that they’re offering. the Original Sound System’s sleek look is complement by a virtually buttonless design, where everything you need to control will be via your connected device such as your smartphone and tablet. we have nothing against buttons but if a speaker system can do without them, it is all the more merrier – well, for minimalism sake. instead of the usual plastic enclosure, Croon Audio has opt to go with 8mm thick Medium-Density Fiberboard (commonly known as MDF, the stuff that most Ikea furniture are made of) manufactured wood which allows for Very Low Distortion (VLD) technology when cranking up the volume. it features a pair of 2.5-inch forward facing full range drivers, Class D amplifier, strategically placed isolation cones, and a 3.5mm audio input jack that caters to non-Bluetooth enabled devices. available in a choice of hues, including the regular Original Black for $199.99, Grey Agent or Premium White on White for $229.99 and a limited edition Lady in Red for a pricer $234.99.