Disney’s biggest cash cow is probably not the surprise hit Frozen, or any other of its animated flicks. If anything, it would be Marvel and Star Wars, which now proves to be the two most worthy acquisitions the entertainment company has ever made. And I am not going to lie: we never loved Disney this much before. Disney has taken, in particular, Marvel to a height previously unthinkable and it is continuing to do so by giving fans more tangible experience outside of the theaters. The Marvel-themed Disney’s New York Hotel is one such endeavor.

Announced by Disney Parks Chairman Bob Chapek at the D23 Expo, this essentially Marvel super heroes hall-of-fame hotel will be filled with familiar Marvel characters, including the likes of Iron Man, The Avengers, Spider-Man and more, in the midst of Disney’s New York Hotel art deco style and contemporary decor. Also, expect to find ‘artefacts’ from the Marvel Cinematic Universal such as Cap’s shield, Loki’s Staff and Thor’s Mjolnir too. It is not known if individual rooms will be Marvel-themed, or it will be limited to the lobby as the artist impressions have depicted. 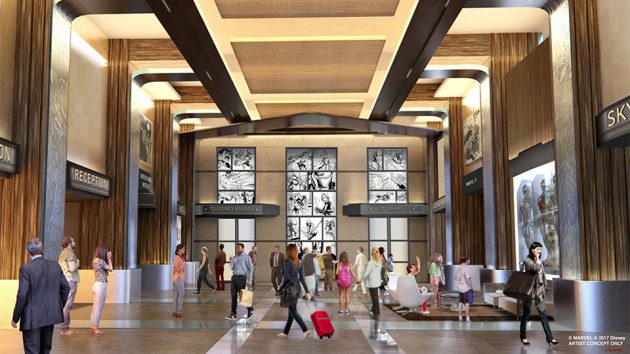 Beyond that, Disney just want you to hit up its parks, really. You probably won’t immersed yourself too long in that wonderful setup after having paid for the pricey tickets. The hotel will be located in the most unlikely place (at least to us, it is unlikely): Disneyland Paris, just steps away from the Disney Village and theme parks. Here’s some words from the horse’s mouth:

“We’re going to create a hotel at Disneyland Paris that would make Tony Stark proud… I’m thrilled to announce that Disney’s Hotel New York – The Art of Marvel will transport our guests to the action-packed, inspiring world of superheroes including Iron Man, The Avengers, and Spider Man among others!”

So, there you have it, another prove that Marvel is the future of entertainment.