Before you throw up your hands and exclaim, “look, another example of robots are taking over our jobs,” you have to understand that the Remote Operated Vineyard Robot, or ROVR, developed by Virginia-based Digital Harvest is not here to take away your job. Unlike typical robots which are most definitely designed to give mankind a run for their money, the ROVR here is to value-add. Billed as one-of-the-kind technology, ROVR is the fruit of labor after eighteen months of development that is fixated on addressing labor scarcity in the vineyard industry.

Now, here’s the thing: harvesting fruits is a backbreaking job and this result in folks turning away from this job which result in what CEO of Digital Harvest Young Kim sees as the cause of labor scarcity. ROVR is, like I said, not here to replace the ageing skilled workers in this industry. It is designed to take the weight of the shoulders of these skilled workers who are typically in their late 50s or early 60s, and as one can imagine, late 50s to early 60s is not exactly an age bracket that can handle 20-30 lbs of fruits with ease. 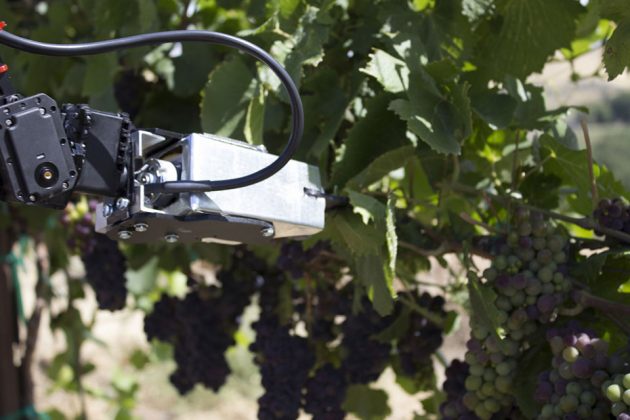 Instead of diving into complex and costly machine learning and artificial intelligence that would allow a robot to replace a human entirely, ROVR leverages on virtual reality interface to keep human in the loop. Using VR, a worker can manipulate the robot to do what he/she would do in person, out in the field, and doing it even while halfway across the world. Of course, the beauty of it is, the worker can work risk-free, using the robot on the ground as its surrogate to take on the heavy lifting.

NOW READ  Yaw2 From Yaw VR Is Not Just A VR Motion Simulator. It Is Also A Smart Chair Too

How ROVR works or how the machine actually looks like is not known, but if you are heading to the 2017 FutureFarm Expo in Pendleton, happening on August 15-17, you will be treated its first public demonstration. The project ROVR team have, up to this point, developed a fully mobile concept demonstrator at their Pendleton, Oregon R&D lab, at the company’s reattach outpost at the Pendleton UAS Test Range. Digital Harvest, btw, is also the only private company operating the Yamaha RMax unmanned aerial crop sprayer in the U.S.

Speaking of which, Yamaha RMAX/Fazer autopilot system flight demo pilot, Hideki Shibata, along with George Kellerman of Yamaha Motor Ventures & Lab are among the many key presenters at the FutureFarm Expo and so, if you are interested in all-thing tech in agriculture, FutureFarm Expo is the forum you want to be in. And no, the future of farming is not only about aerial sprayers and autonomous tractors. It is so much more. Expect to be wowed by other innovative tech like beyond line-of-sight crop imaging and managing cattle from the sky too.

In short, get ready some pretty serious high-tech farming gizmos and tech at the FutureFarm Expo. Man, I wish could be there to ogle over all these stuff of the future for today.