Remember when we were little, parents used to tell us not to play with food? As time progresses, it is hard to imagine not to play with your food, as proven by many contraptions, both homemade and commercially available. The DIY Cheese Ball Machine Gun by YouTuber NightHawkInLight is one such example. The name pretty much says it all, doesn’t it? While toys like the marshmallow gun enable your ‘victim’ to munch that soft, fluffy snack, NightHawkInLight’s creation is not so. In fact, it almost like a watered down paintball gun, except that it won’t leave paint stains. It does, however, leaves traces of the orangey yellow snack upon impact. 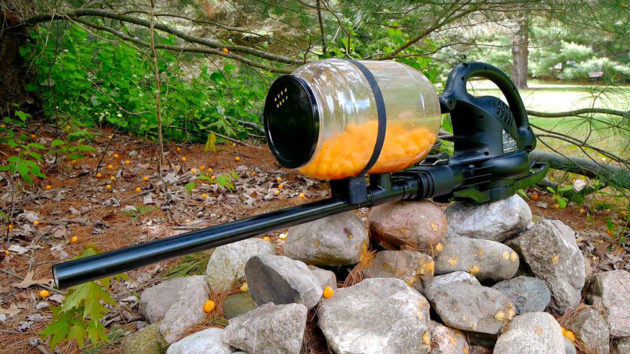 The concept behind DIY Cheese Ball Machine Gun is surprisingly simple, but not as straightforward simple to build. Power comes from an electric leaf blower, preferably tethered if you want endless hours of cheesy fun, hooked up to a plastic PVC pipe of 1-inch in diameter. A lightly modified tub of cheese balls, which serves as the ‘magazine’ for the snack ammunition, is fitted to the top of the PVC pipe and gravity is responsible for feed. Special care was taken to ensure the gush of air coming out of the leaf blower do not back flow into the cheese ball chamber and a stirrer of sort was also added to ensure the cheese balls don’t get in the way of the feed.

As a finishing touch, the contraption was painted in black for extra points in the aesthetic department. The result is a fun cheese ball dispensing weapon that can send the cheesy snack downrange at a pretty astounding velocity. Continue reading to catch the DIY Cheese Ball Machine Gun in action in the embedded video below.