While we talked about going wireless, the very device that we depend on isn’t quite wireless. We are talking our smartphones. Not all of them supports wireless charging, which makes smartphones not a true wireless device as it has to be tethered when being charged. Of course, the market is not lacking of third-party wireless charging solution, but this one French company, Energysquare, has came up with a brilliant and totally unobtrusive solution that would lend wireless charging to multiple mobile devices and charging them at the same time. 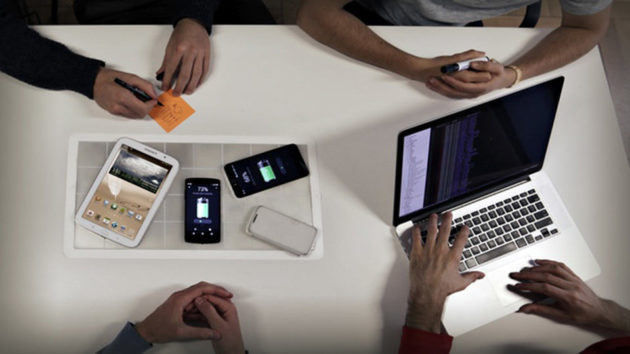 The outfit’s first product of the same name is essentially a big-ass charging pad that can charge up to five smartphones of virtually any make simultaneously. The real draw here is the ability to charge multiple devices at the same time and at the same speed as traditional chargers, which probably explains why the campaign on Kickstarter has received much love. Anywho, Energysquare comes with specially designed strip stickers embedded with patented conductive charging technology. Each device gets a sticker that adheres to the back of your smartphone or tablet to enable wireless charging and it is compatible with both Android and iOS devices.

Energysquare’s inventors are ambitious; they have created an open source standard which they hope that manufacturers will make their products Energysquare compatible. Though the team did not detail how they are going to go about executing it. Two sizes of charging pad are offered on Kickstarter: Square One which measures 267.62 x 267.62 mm (10.53 x 10.53 inches) and a 267.62 x 400.5 mm (10.53 x 15.76 inches) Square Two.

NOW READ  Behow WYPE Sweeping and Mopping Device Will Save You Loads Of Time! [Review]

If you want one, you have about nine days or so to back the campaign and since it has already met its funding goal, your pledge will constitute as a pre-order which, if all goes as planned, will be fulfil later this year. As for the price, 59 euros or more (about US$67) will land you with a SquareOne which comes with five stickers for the device of your choice, or for 69 euros or more (roughly US$78), you will be able to secure a SquareTwo, which also comes with five stickers.