post-apocalyptic scenario is not something anyone look forward to, but strangely, it is also an scenario mankind have dream up of in movies and in games. however, if it does happen, then this bike, aptly named Fallout 3 Bike, is the two-wheeler you’d be seeing roaming on the wasteland, among the crumbled buildings – if there were even any to speak off. dreamed up by a high school student by the name of Chris Riffel, who instead of chasing after rock stars and smoking weeds, coaxed some teachers and friends into helping him create this fully functional motorcycle. personally, i am not so much of a post-apocalyptic dude, but i have to admit this bike really had me at hello. 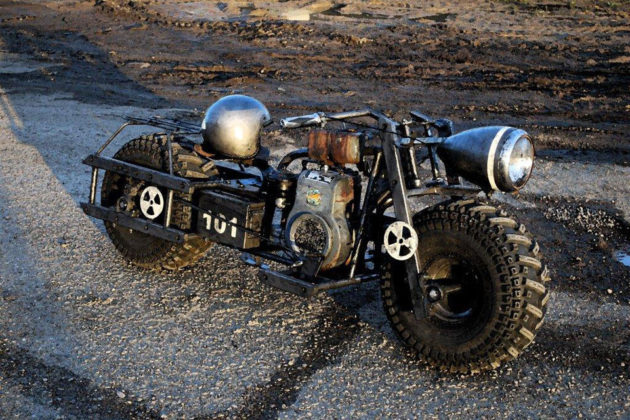 weeks were poured into this bike which consisted mainly of welded steel, just like an apocalyptic vehicle would, and is powered by an unknown engine pulled out of the scrapyard. the thing about this awesome bike is, it has all the necessary elements that are all signs of what a post-apocalyptic vehicle would be (due to the limited resources): visible welds, scrapyard-sourced motor, rusty steel saddle, lack of transmission and suspension. you probably don’t need the latter two where you are going with this bike and besides, its huge, chubby tires should be ample to absorb what the wasteland has to serve up since this bike ain’t going to go awful fast. however, it does have a proper pannier though, in case you do have some supplies to travel with.

there is probably no performance to speak of, but the rugged construction that yields the rugged look really speaks beauty, which is further accentuated by details like the gleeful Fallout 3 iconic boy logo and the appropriate radiation emblems found around the bike. it was love at first sight for me. what about you? 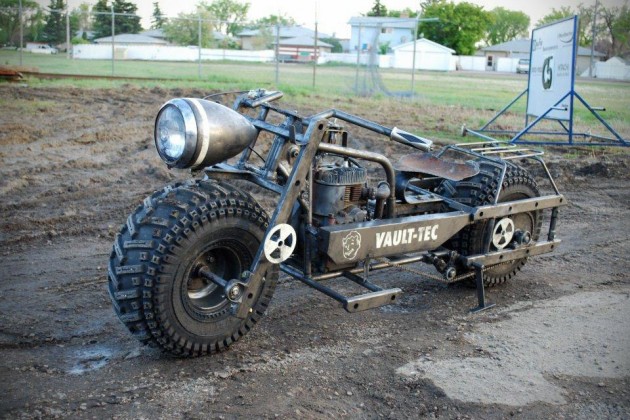 via The Awesomer via Silodrome