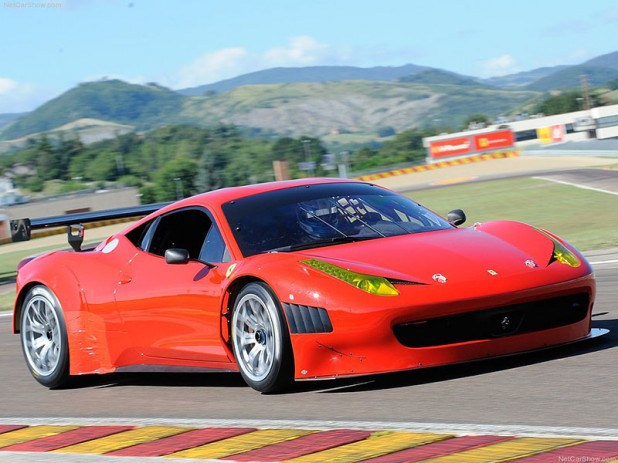 Ferrari debut its new 458 Italia Grand Am race car on the July 18 at the Fiorano Circuit. based on the GT3 version of the V8 Ferrari Berlinetta, the 458 Italia Grand Am race car is developed in conjunction with Michelotto Automobili for the purpose of competing in the famous North American series (hence, the namesake ‘Grand Am’). since it is built for the American championship, the car has numerous difference from its European model. in meeting with the American regulations, the car now has 500 horsepower, 70 less than its stock engine, and sport a less efficient aerodynamics than the GT version. the redline is now peg at 8,000 rpm, instead of the stock 9,000 rpm on its stock form. other changes include a less efficient aerodynamics as compared to its GT version, the inclusion of a roll-over bar for added lateral protection, and the lack of ABS and traction control. check out a few more images of the Ferrari 458 Italia Grand Am race car, courtesy of NetCarShow, after the break.
[ad#Google Adsense-text-468×60]